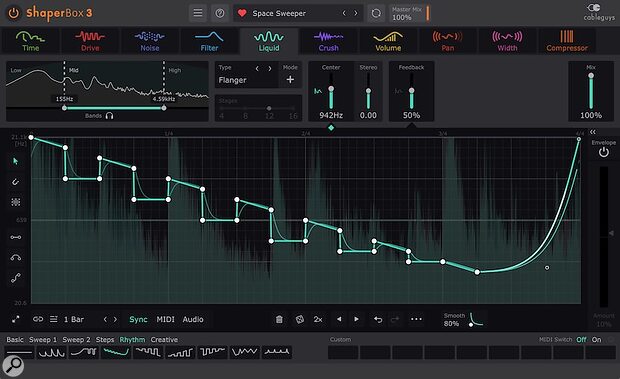 Cableguys have released ShaperBox 3. This latest version of their multi-band, multi-effects plug-in introduces a new flanger/phaser, increasing the total effects count to nine, as well as implementing a wide range of new features and improvements.

All of the effects in ShaperBox 3 can be controlled with an LFO, which users are able to draw in via a simple visual interface. This intuitive approach allows the creation of custom modulation patterns which can be synchronised to a song’s tempo, triggered via MIDI, or even in response to an audio source’s transients courtesy of a new Audio Triggering mode. 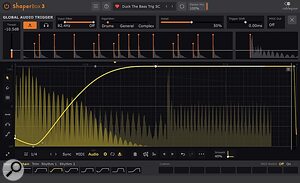 A new Audio Trigger mode allows ShaperBox's LFO to be triggered by transients in an audio signal. When engaged, the new Audio Triggering mode restarts the LFO with each transient, allowing ShaperBox to be used as a transient editor and rhythm-tracking creative effect. This functionality makes it possible to redraw the envelope of any sound, or to generate creative effects such as filter patterns and noise sequences from the natural rhythm of drum parts, instruments, or even full mixes. Further options are provided by an external side-chain input, allowing one audio source to be used to trigger the processing of another.

In addition to the existing Volume, Time, Drive, Filter, Crush, Noise, Pan, and Width effects, ShaperBox 3 also introduces a ninth processor in the form of the LiquidShaper flanger and phaser. This latest addition features Centre and Feedback parameters that are capable of being modulated individually across three frequency bands, and also utilises the plug-in’s custom LFO shapes to offer a huge range of sonic possibilities from gentle stereo modulations to monstrous robotic comb filter effects.

A new browser has also been implemented, with a wide range of presets organised into clear categories which the user can filter, allowing for a quick and easy way to discover and explore new sounds.

As well as the newly added features, ShaperBox 3 also includes a variety of improvements. The multi-band compressor is now available as a separate tool, and can be inserted anywhere within the processing chain, whilst an improved Master Mix algorithm allows users to smoothly blend between wet and dry without introducing multi-band phasing artefacts. A new master Bypass button also allows click-free switching between the processed and original dry signal.

The plug-in’s Envelope Followers feature an improved Adaptive Release mode, providing them with a more analogue-style response, whilst some of the existing effects have also received some enhancements. VoumeShaper is now equipped with a lookahead pre-smoothing feature for click-free MIDI and audio side-chaining, CrushShaper has gained a Dynamic Treble control to compensate harshness, and TimeShaper now features a time offset display for improved visualisation.

ShaperBox 3 is compatible with Windows and macOS operating systems, and is available in VST2, VST3, AAX and AU formats. For Mac users, both Intel and Apple Silicon processors are supported.

ShaperBox 3 is available now, with pricing as follows:

Users of ShaperBox 2 can log into their user accounts to benefit from upgrade pricing options.