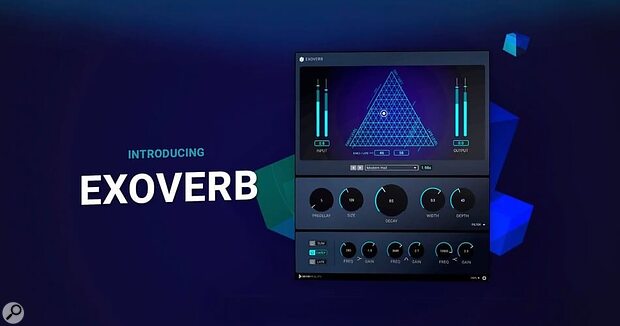 Dear Reality have announced the release of Exoverb. Whilst the company’s previous releases have focused on immersive audio, this latest offering is a stereo reverb plug-in which they say is capable of offering an as yet unheard three-dimensional depth and width perception to stereo productions.

The plug-in provides 50 reverbs which have been organised into four categories: Ambiences, Rooms, Halls, and Plates. Each preset is based on multiple impulse responses that have been developed with Dear Reality’s proprietary software.

As with the company’s other plug-ins, Exoverb features a straightforward interface that has been designed to be simple and intuitive to operate. An innovative triangle pad places the ratio of early reflections and late reverb sounds on the x-axis, and the balance between dry and wet signals on the y-axis, allowing users to blend between settings with their mouse to create their desired effect.

A row of controls then provide direct access to the plug-in’s Predelay, Size, Decay, Width, and Depth parameters, allowing for further control without the need to navigate sub-menus or additional pages. Three individual EQs are available, allowing separate settings to be applied to the early reflections, decay, and summed signal. Each of the EQs are equipped with three bands and offer a low-shelf, a parametric, and a high-shelf filter.

Exoverb is supported on PCs running Windows 10 or 11, and Macs running macOS X 10.9 or higher. Intel and Apple Silicon processors are both supported. The plug-in is available in VST3, AU, and AAX formats. The AAX version requires Pro Tools 2019 or higher.