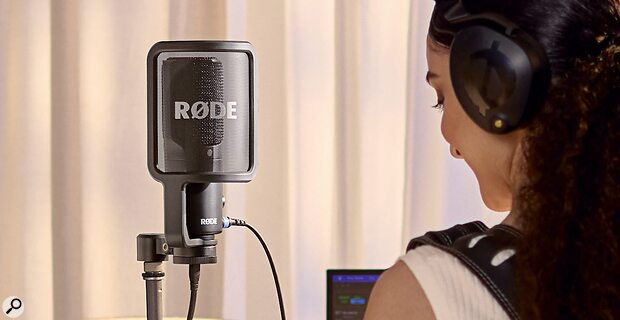 Rode have announced the release of the NT-USB+, the latest addition to their range of USB microphones. Based on the popular NT-USB, this latest offering promises to deliver studio-quality sound in a simple, compact package, and has been upgraded with next-generation features such as on-board DSP which can be controlled from mobile or desktop applications.

The NT-USB+ comes supplied with a detachable pop filter, and a desktop stand.Rode say that the NT-USB+ employs a studio-grade capsule and utilises the preamp technology introduced in the Rodecaster Pro II, allowing the microphone to deliver pristine audio via an upgraded built-in 24-bit/48kHz A-D converter. The microphone exhibits a tight cardioid polar pattern, and is recommended for use on vocals, speech, and instrument recordings alike.

There is also an on-board headphone amplifier, which allows the microphone to provide zero-latency monitoring facilities, with level and mix controls available on the side of the device’s body. Connection to a computer, smartphone, or tablet is offered via USB-C, and the microphone is bus-powered.  The NT-USB+ also comes supplied with a detachable pop filter and desktop stand.

A key feature is the inclusion of internal DSP, which offers a range of audio processing powered by Aphex, with the microphone benefitting from an on-board high-pass filter, compressor, and noise gate, as well as Aural Exciter and Big Bottom effects. This processing can be activated via the Rode Central app, which is available for both desktop and mobile platforms, as well as from Rode Connect, the company’s free podcasting and streaming software.

“The original NT-USB was an instant success when it launched almost a decade ago, setting a lofty standard for studio-quality USB microphones. With the NT-USB+, we are setting a new standard. We have kept the form factor and functionality that made the original such a success and introduced several new features, integrating cutting-edge technology for the next wave of creators. Plug-and-play USB audio has never sounded this good.” - Damien Wilson, CEO of Rode