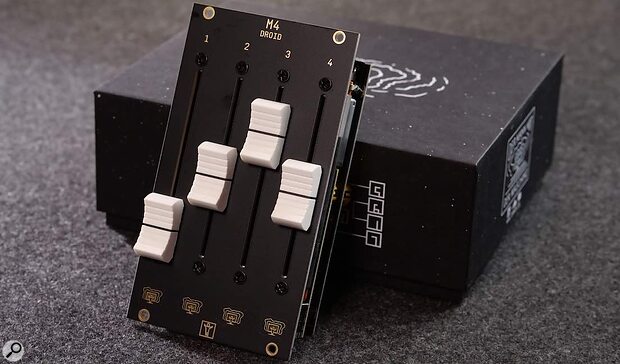 Der Mann mit der Maschine have announced the release of two new Eurorack modules, the M4 Motorfader Controller, and the S10. Both of the new devices offer control over the company’s Droid Master, a module which generates and processes CV signals for Eurorack modular systems. The M4 Motorfader Controller is equipped with motorised faders, which the company say is a first for the Eurorack format, whilst the S10 offers two rotary switches and eight toggle switches. All of the controls on each module can be configured via Droid Forge, a Windows and Mac software application.

The S10 features two rotary switches and eight toggle switches, the functions of which can be assigned using the company's Droid Forge software application. An M4 module features four motorised faders, which can be used to control a range of parameters in a Droid patch including sequence steps, digital mixer volumes, envelopes, and CV values. Each fader can be assigned to multiple functions or presets, and will move to reflect their current value upon a function being recalled.

A haptic feedback function allows the module’s faders to create virtual grooves using the motor, providing an intuitive way for users to distinguish between several values without the need for a display. The company say this is a particularly helpful feature for carrying out tasks such as selecting notes from a scale when controlling a sequencer, switching between clock divider settings, or selecting preset numbers. The faders are also capable of utilising their motors to mimic the behaviour of a pitch-bend wheel, with the fader returning to a centre position upon being released.

Der Mann mit der Maschine say that the main reason that makers of Eurorack modules avoid motorised faders is due to their high power requirements. They say have tackled this challenge with the inclusion of supercapacitors which deliver power to the faders only when they need it, limiting the overall power requirement of the module. Jumpers on the rear of the device allow users to choose between a peak current of 350, 450, 500, or 600 mA.

The S10 controller houses two large eight-position rotary switches, and eight three-position toggle switches. All of the switch positions can be assigned to control values in a Droid patch, with the device offering a total of 40 different positions within a 5HP module. 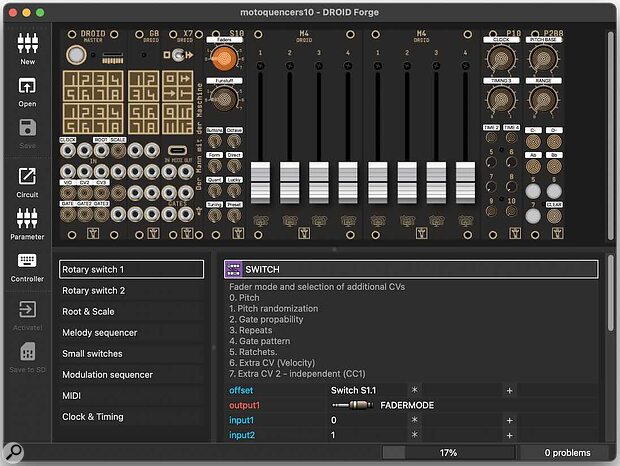 Both the M4 Motorfader Controller and S10 modules can be programmed via the company's Droid Forge software, which is available for Mac and Windows systems.

Both modules are available to order now. The M4 Motorfader Controller is priced at €488 and the S10 at €138.