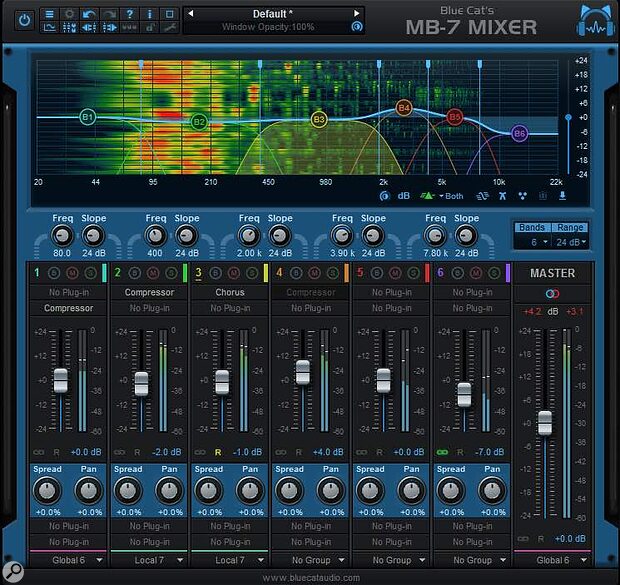 Blue Cat Audio have announced a free update for MB-7 Mixer, a multi-effects plug-in which is also capable of hosting third-party plug-ins on separate frequency bands, allowing users to create their own multi-band processing chains.

Up to seven bands can be created with crossover filters ranging from 12 to 192 dB/octave, and in addition to being able to host third-party plug-ins, MB-7 Mixer features 30 built-in effects which include EQ, delays, reverbs, filters, modulation effects, a bit crusher, a waveshaper, and more. The latest update increases MB-7 Mixer’s versatility with the addition of new macro parameters alongside a range of other new features and improvements.

A new macro control editor allows parameters from multiple loaded plug-ins to be mapped to a single control knob, with users also able to specify the adjustment range. The appearance of the controls can be changed, with 18 predefined styles of macro knob included, and a name can be assigned to the resulting parameter, with most host applications able to display the new name in their automation lanes. New learn modes have been implemented, allowing users to quickly assign plug-in parameters, and many of MB-7 Mixer's existing presets have been updated to include new macro controls.

A new option has been added to the global and preset input settings, allowing the plug-in to send MIDI events when MIDI-enabled parameters are modified, meaning that connected control surfaces can be updated accordingly. In most plug-in formats, it is now possible to set the internal I/O configuration regardless of the configuration defined by the host application, meaning users are able to reduce the number of channels being processed to reduce CPU usage, for example.

Other enhancements and fixes include improvements to parameter value displays in some host applications, and performance improvements when the plug-in’s user interface is being loaded. Native Apple Silicon support has been implemented in the AAX version in anticipation for an M1/M2 native version of Pro Tools, and installers and plug-ins have been updated to avoid Mac users facing security warnings when installing the plug-in on macOS Catalina and above.

Blue Cat Audio say that they have resolved an issue that prevented MIDI messages being passed between some MIDI-enabled plug-ins, and that VST3 GUI re-sizing issues have also been fixed, along with an issue that required the Bypass button on some VST3 versions to be clicked twice before responding.

MB-7 Mixer 3.5 is supported on PCs running Windows Vista or newer, and Macs running macOS X 10.9 and above. Both Intel and Apple Silicon CPUs are supported. It is available in AU, AAX, and VST3 formats.

MB-7 Mixer 3.5 is available now, with existing users able to download the update for free. New customers are currently able to purchase the plug-in for a discounted price of $99€99 until 22 December 2022, after which it will be priced at $129€129.