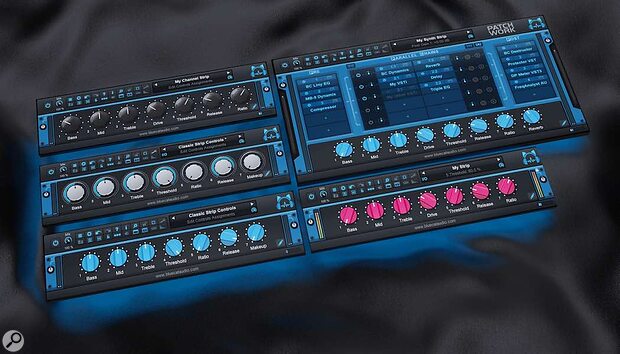 Blue Cat Audio have announced an update to PatchWork, a multi-effects plug-in that is also capable of hosting additional third-party plug-ins, providing series and parallel routing of multiple insert effects within a single interface.

The plug-in contains 30 built in effects including reverb, EQ, filters, pitch & frequency shifter, delays and modulation effects, along with a compressor, gate, bit crusher, wave shaper and more. All of the included effects can be combined with additional third-party plug-ins hosted directly within PatchWork, with users able to create and recall custom processing chains with series and parallel routing options.

Another useful feature is that due to its hosting capability, PatchWork can be used to load plug-ins in DAWs that they are not directly supported in, allowing users of Pro Tools or Logic to utilise VST plug-ins, for example.

A key feature of the latest update to PatchWork is that the plug-in now offers macro parameters, facilitating the control of several parameters across multiple loaded plug-ins with a single macro knob. A new editor window allows users to assign parameters from each loaded plug in, set their ranges and even choose a knob style for the resulting control. The new parameter can then be renamed within PatchWork’s GUI, essentially allowing the creation of a custom plug-in.

The internal audio I/O configuration for PatchWork is now accessible, allowing for an increase or decrease in the number of internal processing channels regardless of the configuration chosen by the host application. Blue Cat Audio say that decreasing the channel count can help to reduce CPU usage, whilst increasing it can allow for the creation of internal side-chains or auxiliary buses to provide more advanced routing options.

A MIDI output is now available in the standalone version of PatchWork as well as the plug-in, allowing it to be used to control external MIDI devices. Input and output devices are selectable in the Audio/MIDI Preferences window. Control surface integration has also seen improvements, with a new option to send MIDI Control Change messages upon changes being made within the user interface. This allows bi-directional communication between PatchWork and MIDI control surfaces, resulting in controllers being able to reflect changes made within the software.

PathWork 2.6 is available now, and is currently being offered at a price of $79€79 until 26 October 2022, after which it will cost $99€99. Current owners of PatchWork are able to upgrade for free via the Blue Cat Audio website.