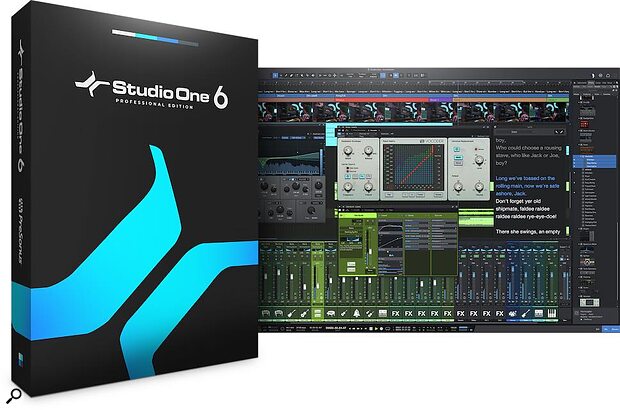 PreSonus have today released Studio One 6. This latest version of their award-winning DAW software introduces a host of new features and enhancements, including customisation options for the user interface that PreSonus say make version 6 their most personal upgrade to date.

The addition of a Customisation Editor provides a convenient way of showing or hiding nearly all of the tools and functions within Studio One, allowing users to configure the appearance of the software specifically for the task at hand. Changes are applied instantly and customisations can be saved and recalled at will, allowing the software to be tailored to each part of the production process. 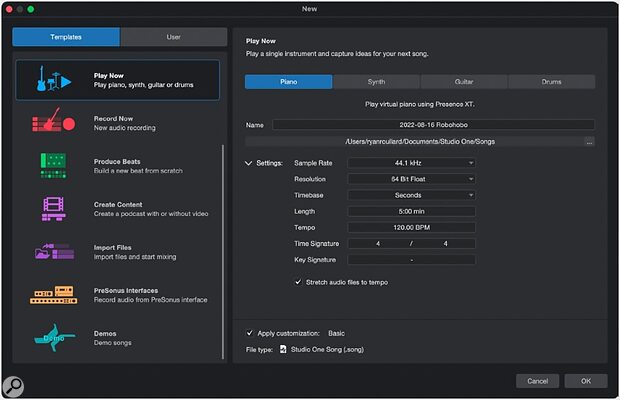 Smart Templates offer a quick and easy way to set up sessions for a wide variety of tasks.

A new Smart Templates feature combines pre-configured tracks and channels with the new customisation options, providing toolsets for a wide variety of tasks including recording, mixing stems, mastering, setting up for a live show, and more. Templates can also include ‘drop zones’ which allow users to easily import any audio, video or MIDI content required for their project, and some include interactive tutorials which provide instructions and links to related video content.

The upgrade sees the introduction of some new plug-ins, along with improvements and additional features to existing effects and instruments. A new simple and intuitive de-esser has been added, and users of Studio One Professional also gain a vocoder.

ProEQ has been updated, with each frequency band gaining both a solo function and a dynamic operation mode. Autofilter now has independent Attack and Release controls for the envelope, and a new Flip option to invert the modulation polarity in the LFO section. Instruments have not been left out, with Mai Tai, Sample One XT, and Presence XT now offering support for polyphonic aftertouch and MPE (MIDI Polyphonic Expression).

Whist all versions of Studio One have gained a significant amount of new features, there are some additions that are exclusive to the Professional edition. A new Global Video Track capable of holding an unlimited amount of video clips makes it easy for composers or sound designers to work on multiple reels within a single session. The track provides an intuitive workflow, built around Studio One’s renowned drag and drop functionality, and a basic set of editing tools are available allowing users to trim video clips within their session. 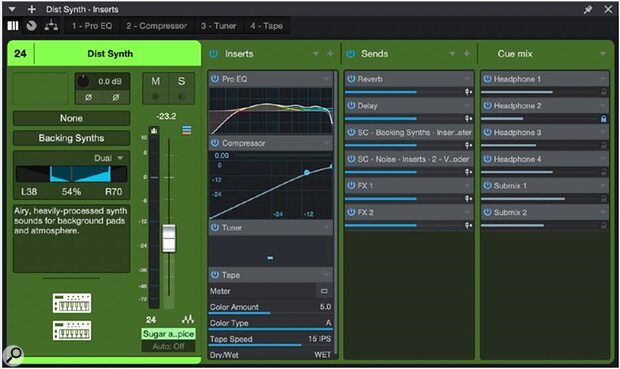 The Channel Overview tab displays a consolidated view of all channel parameters.

Some advanced mixer functions have been introduced, with a new Fader Flip mode allowing FX/Bus sends, side-chains, and Cue Mix sends to be set up and balanced from the main faders by right-clicking on the desired send and selecting Flip. A new Channel Overview tab within the Channel Editor window provides a single, consolidated view of all channel parameters, this tab follows the selected channel and can be pinned anywhere on the screen.

A new Global Lyrics Track allows users to add lyrics to their scores, songs, and productions, and can even be transferred to the Show Page for use during rehearsals or live performances. When working with MIDI in the Score or Piano view, lyrics can be attached to notes, word by word, or even by syllable. A selection of font sizes and text alignment options are on offer, and the Lyrics View also serves as a text editor for formatting words.

Further customisation is offered in the form of Track Presets, which can store every parameter of a given track or channel (or groups of tracks and channels) for instant recall. As well as being loaded into a session as a new track, their settings can also be applied to any existing track.

The Start Page has also been given an overhaul; Songs, Projects and Shows can now be organised into custom folders, allowing all files associated with a particular artist or production to be kept in one convenient location. Producers and engineers working with multiple artists are now able to create and manage an Artist Profile containing a name, genre, website, and image for each client, which can then be embedded as ID3 tags when exporting mixdowns. Custom folders can also be created from within the Browser to house plug-in and instrument presets, and those presets can now be marked and automatically added to a new Favourites folder at the top of the respective preset list.

FX Channels are now equipped with sends, allowing the output signal of one effect to be sent directly to another, and virtual instruments that require an external audio source (such as samplers or vocoders) now benefit from a side-chain audio input that can be fed from anywhere within the mixer. Alternative panning modes have been added to the mixer, with stereo channels now featuring balance, dual or binaural modes, and a new pop-up editor provides a large pan control along with a menu to switch between modes. 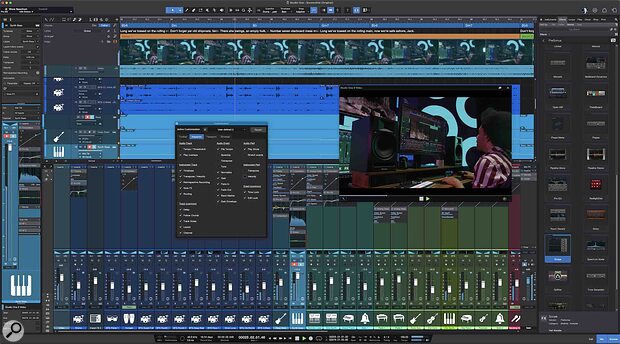 New customisation options for the user interface allow users to show or hide nearly all of the tools and functions within Studio One.

Studio One 6 is available now, with pricing as follows:

*Prime and 30-Day Professional Demo not available at launch