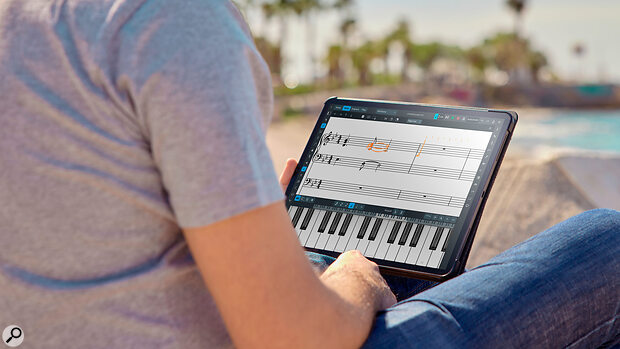 Steinberg have just released an iPad-compatible version of their powerful notation software Dorico. Dorico for iPad apparently retains the desktop version's streamlined interface, even keeping the same keyboard shortcuts (for which Steinberg recommend using it with a Bluetooth keyboard), and adding an on-screen MIDI piano keyboard to boot. Oh, and best of all: it's free.

One of the features that makes Dorico unique among score editors is that it also features a DAW-style piano-roll MIDI editor, complete with CC lanes. Dorico for iPad apparently takes this one step further, with a new Key Editor view that's designed specifically to take advantage of the iPad's multi-touch interface.

The audio engine remains unchanged from the desktop edition of Dorico, and this new iPad version even includes a library of sounds and effects to get you composing straight away. Plus, it's compatible with Apple's Audio Unit format, so you can use third-party instruments and effects in your compositions. Compositions made on the desktop version are fully compatible with iPad projects, and vice versa, so you can start a composition on the move and then finish it off at your desktop workstation.

Though the app itself is free, Steinberg are hoping to tempt advanced users to a $3.99/month (or $39.99/year) subscription plan, which opens up features such as detailed graphical editing of scores and musical symbols, and the ability to score for larger ensembles. The app requires an iPad Pro, Air (3rd-gen or newer), or a vanilla iPad 7 or higher, and 570MB of storage space. To try it out, visit the Apple App Store at the URL below.