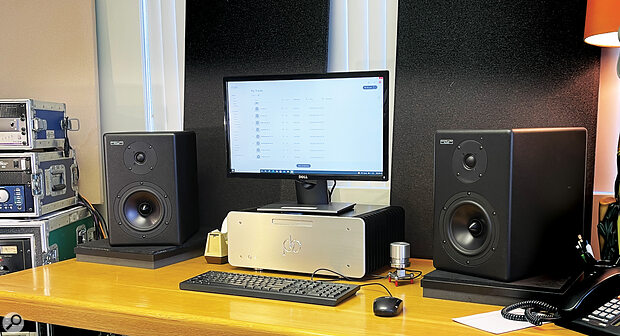 Ocean Way Audio have just revealed a new nearfield monitor, called the Pro3. A two-way, active design, the Pro3 (nicknamed 'Fat Boy') pairs its one-inch silk-dome tweeter with a seven-inch aluminium-coned woofer, and is said to have a frequency response that extends from 45Hz-20kHz (no tolerances are given).

The cabinet is rear-ported and trapezoidal in shape, in order to reduce internal standing waves, while the cabinet walls themselves were apparently made using materials specifically designed to minimise resonance.

Though Ocean Way haven't revealed much about its electronics, the AES3 in/out XLRs round the back (alongside the traditional balanced analogue input) suggest that some DSP has been involved, perhaps for the crossovers or potentially even driver alignment.

The Pro3 is shipping now, and carries a price of $2499 per pair. We'll be bringing you an in-depth review in due course.