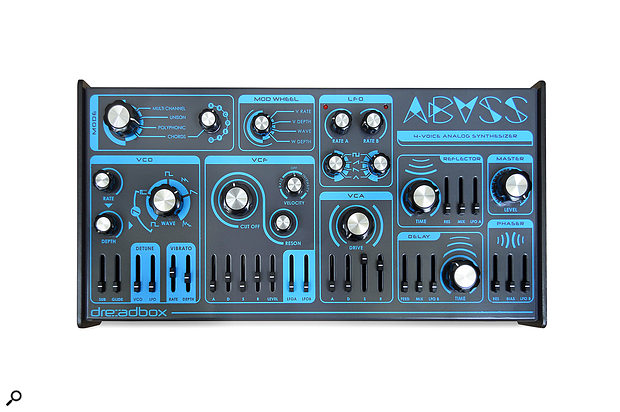 Launched at the NAMM Show 2017, the new Abyss synthesizer from Athens-based Dreadbox builds upon the company’s already well established Erebus and Hades, and more recent NYX mini synthesizers, to now offer the Abyss four-voice polyphonic synthesizer. Release in the UK isn't far off either, with units set to arrive in April via UK distributor Nova Distribution.

Using the same oscillators as the rest of the Dreadbox range, the Abyss operates in four global modes that each use the synth’s four available analogue voices. These modes include 'Multi' for one-voice per MIDI channel; Unison for all voices together; Polyphonic for playing multiple notes together; and lastly chord mode where a single key will play a chord of four voices with a selectable rotary switch to select the root key.

The four voices are made up of one oscillator and one sub oscillator per voice, with a knob that allows the user to sweep between waveforms allowing hybrid waveforms to be generated, including a white noise generator. The VCO section also offers detuning and vibrato modulation and there is a polyphonic glide slider to allow smooth envelope transitions between notes. There is also a modulator available on the VCO with independent rate and depth controls.

The Voltage Controlled Filter is based upon the highly respected Dreadbox Murmux Synthesiser offering a 24 dB/Oct (four-pole) resonant low pass filter. The filter also comes with a digital ADSR envelope generator to further shape the sound of the filter. In addition, the Abyss features a dedicated Voltage Controlled Amplifier with digital ADSR envelope generator and OTA drive circuit knob for saturating the VCA.

Things start getting very interesting with the Abyss when the three built-in effects stages are taken into account — the Abyss offers a 1024 BBD reflector effect for chorus/phaser and static flanger effects. Also included is the lo-fi delay effect found in the Erebus synthesizer and lastly a four-stage analogue phase shifter. Effects are controllable via CV and the time-based effects can be modulated by the two independent built-in LFOs, each with independent rate and four LFO waveforms to choose from.

The Dreadbox Abyss comes in a dedicated aluminium flight case and will be shipping in April priced at £999 including VAT. Find your nearest dealer on the Nova website.