Celebrated for their fast transient response and extremely wide and flat frequency range, Earthworks’ distinctive small-diaphragm mics are an ever-popular choice for drum miking. Now, the company has produced a new cardioid condenser specifically intended for miking snares and toms, called the DM20.

Designed to mount onto the rim of the drum using the included mounting hardware, the DM20 DrumMic features a flexible gooseneck that allows precise positioning of the right-angled mic head. Earthworks say that the gooseneck is stiff enough to stay put even when the drum is hit hard, while the stainless steel housing will protect the capsule from a direct hit from a drumstick. The designers say that the DM20 can handle SPLs of up to 150dB, while the “near-perfect” cardioid polar pattern provides 32dB of rear rejection, reducing bleed from other sound sources (such as hi-hats) and combatting feedback when the DM20 is used on stage. The mic’s very fast impulse response and short diaphragm settling time are said to be ideal for capturing subtle details with maximum clarity. The DM20 is available now, priced $419. 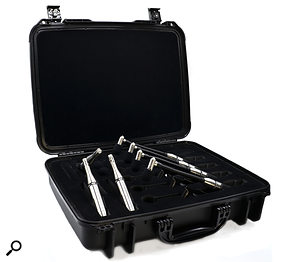 Earthworks are distributed in the UK by Unity Audio.