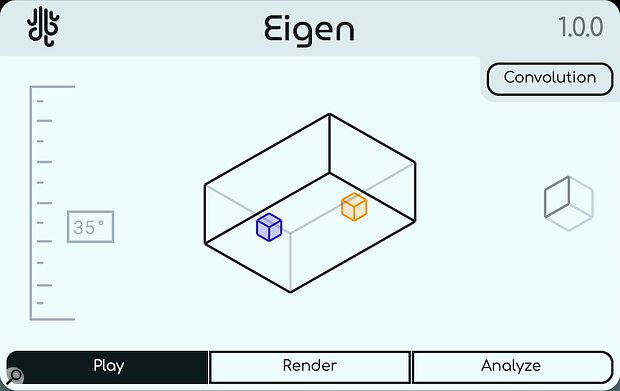 Plug-in developer Lese have announced the release of Eigen, a room modelling reverb which allows users to input dimensions and materials in order to recreate a room’s reverb profile, which can then be exported as an impulse response. The resulting file can either be loaded into a third-party convolution reverb plug-in, or used directly within Eigen itself.

Users are able to create a cuboid room with X, Y, and Z parameters allowing length, width, and height dimensions of up to 30m, with the resulting shape presented visually within a simple 3D display. The position of both the sound source and listener can be placed anywhere within the created space, and are represented visually by a pair of small cubes placed within the room shape graphic. Construction material options are available for each of the walls, along with the floor and ceiling, with a selection of choices including wood, brick, concrete, and curtains provided. 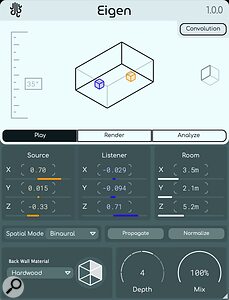 Eigen allows users to generate custom impulse responses from a virtual room, offering dimensions up to 30m and a selection of construction materials.Once users are happy with their reverb it can be exported as an impulse response from within Eigen’s Render page, and the resulting file can then be loaded into a third-party convolution reverb, or used within Eigen itself. The plug-in is capable of rendering a much more in-depth and detailed sound thanks to a ‘Use High Quality Materials’ setting.

With the setting engaged, more advanced versions of the modelled construction materials are employed, and each reflection’s audio is split into ten frequency bands which are processed independently according to the selected material’s measured frequency responses. Lese say that the reason the setting is only available during rendering is that even the most powerful consumer computers are not currently able to carry out this process in real time.

The plug-in also features an Analyze mode which is capable of performing a room resonance analysis, allowing users to see the effect their virtual space has on the lower end of the frequency spectrum.

Eigen is supported on both Mac and Windows, and Lese say that it should be compatible with any recent operating system. It is available in VST3 and AU plug-in formats.

Eigen is available now, and is currently being offered at an introductory price of $40. After 13 February 2023, the price will increase to $65.