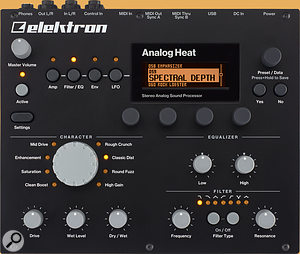 In a departure from their regular line of products, Elektron have announced Analog Heat, a stereo analogue sound processor designed for treating audio in both subtle and not-so-subtle ways. It features eight different analogue stereo distortion circuits with everything from tape-like saturation to harsh over-the-top distortion; a stereo analogue multi-mode filter; and a two-band stereo analogue EQ as well as modulation sources including an assignable envelope and an assignable LFO, making it easy to re-shape beats and create rhythmic textures.

Thanks to Overbridge, a technology that integrates music hardware with computers, Analog Heat can be used as a VST/AU plug-in, making it easy to apply real analogue processing to the DAW. Overbridge even allows the Analog Heat to be used as an 2 in/2 out CoreAudio/ASIO/WDM audio interface.