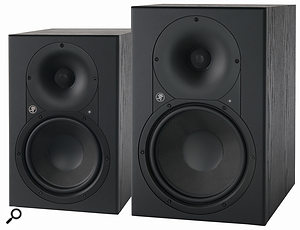 With the HR series, Mackie succeeded in producing one of the most popular active monitors of all time, a common sight in both bedroom studios and professional facilities. While the more affordable MR range has been with us for some time now too, Mackie have now taken a big step in the other direction, designing a more upmarket range aimed at more demanding users.

The new XR Series boasts two models. Following the familiar HR-series model numbering scheme, the XR824 features an eight-inch woofer while the XR624 features a six-inch woofer. The look of the new monitors, which feature a logarithmic tweeter waveguide that recesses the high-frequency driver so that it’s positioned on the same axis as the woofer, is also instantly familiar, but there are plenty of new features below the surface. The elliptical bass reflex port at the rear is at one end of an extra-long tube that curves back around on itself (imagine a letter ‘J’ on its side) and promises an extended bass response with zero turbulence and air noise. Room optimisation switches at the rear can be used to select one of three acoustic space settings plus high- and low-frequency filters.