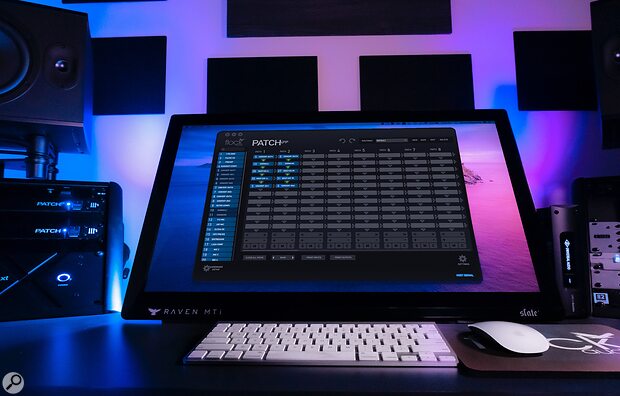 Flock Audio are a company founded with one goal in mind: to take the pain out of patching. Their appropriately named Patch series comprises a number of rack units of various size, into which you patch all your hardware, and which you can then route as desired from the comfort of your computer chair. The Patch racks range from a 1U 16-I/O device to the behemoth 96-input, 96-output Patch XT, but all operate on the same principle, all provide convenient front-panel I/O in addition to their rear-panel patch points, they all use the same software front-end, and they can all be used as part of multi-unit systems.

That software front-end is called, logically enough, the Patch App, and it's just been updated to version 2.1. The update brings a number of workflow enhancements, including new Solo, Mute and Clear buttons, letting you easily audition signal paths, try different signal flows out, or re-patch a signal from scratch. Another improvement is the speed at which you can recall patches — up to 60 percent faster in v2.1, which should make A/B'ing different processing chains a much more pleasurable experience.

The user interface has also apparently been tidied up, so that you can create new signal paths directly from the routing grid, and a number of new key commands have also been implemented. Finally, it's now also possible to hide the phantom power option for inputs where it isn't needed — which declutters the interface and should also help prevent any 48-Volt mishaps.

Patch App 2.1 is of course free to existing owners of a Flock Audio Patch rack. To find out more about the Patch system, check out Flock's introductory video below.