Published 13/3/08
Celemony develop the unthinkable
Pitch-correction software is by no means new; it’s been around for over a decade. But so far, it has only worked effectively on monophonic sources, such as vocals and lead instruments. Until now, that is.

Celemony, developers of the Melodyne pitch-correction application, have announced Direct Note Access (DNA), a new technology that can shift the pitch and timing of individual notes of a polyphonic recording, such as a melodic guitar or piano track.

With Direct Note Access, individual notes of a chord are displayed in Melodyne's piano roll-style GUI, such that they can be dragged around to wherever the user chooses. Furthermore, notes can be muted, so both the rhythmic and melodic content of the audio can be completely transformed.

Celemony say that once DNA has hit the market, studio engineers and producers will be able to think the same way about piano takes, for example, as they do currently with vocal recordings, where a slight blemish can be ‘fixed’ at a later date. This could change the way studio sessions run, and reduce the requirement for overdubbing or re-recording entire takes after minor player errors.

But it’s not just achieving perfect takes that Direct Note Access is capable of. Using the pitch-shifting and time-stretching capabilities to their extremes, some fairly radical effects can be created. But also, melodic material can be transposed, so if you fancy changing a guitar solo from major to minor, you can do so with just a few mouse-clicks. 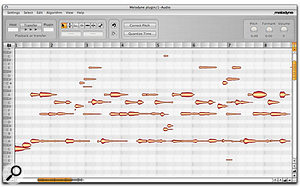 DNA technology's first commercial outing will be as part of Melodyne Plug-in v2, which will be shipping later this year. Celemony are expecting that sample-library users will embrace the technology to turn loops that were previously only playable in the key that they were recorded in into templates that can be transposed to suit the project they're working on.