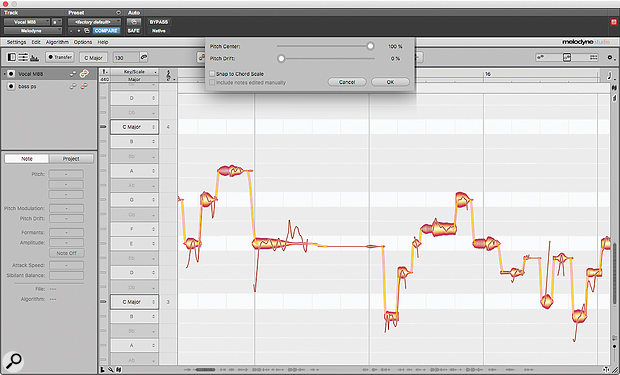 Celemony's acclaimed pitch-manipulation software Melodyne has been given a major update. The headline feature is a new Melodic algorithm, which automatically separates the pitched and non-pitched components — so that note pitches can be adjusted and corrected while leaving sibilance and fricatives unaltered, for a more natural sound. Furthermore, the user can control the ratio of pitched and unpitched elements, for precise and transparent de-essing.

A Chord Track and Chord Grid have also been added to the interface, and combined with Melodyne's chord recognition technology, to allow even theory-shy engineers to make musical decisions about note pitches.

Poorly intoned vocal parts can now be repaired more quickly and effectively, thanks to a new algorithm that detects pitch deviation — so you can correct the perceived pitch of a vibrato note while keeping the vibrato itself. The new Fade Tool and Levelling Macro, meanwhile, let you adjust the dynamics of any note, even in polyphonic material.

Finally, more keyboard shortcuts have been added, to allow you to perform routine tasks more quickly.

As before, Melodyne 5 works in either stand-alone or plug-in formats (the latter requiring an ARA-compatible DAW), and Celemony are offering a range of upgrade paths to previous customers — including a free upgrade to anyone who bought v4 after March 1st.

SOS Editor In Chief Sam Inglis has been using Melodyne 5 for a number of weeks now, and if you're a SOS Digital subscriber you can read his in-depth exclusive review right now by clicking on this link. Non-subscribers will get access to the review in our free July digital magazine (available Thursday 18 June 2020) or they can purchase a single article PDF download of the review now.