Guitar Rig gets a tune-up

Published 10/8/04
Native Instruments are quick off the mark with first Guitar Rig update
Less than a month after its official release, Native Instruments have produced an update to their Guitar Rig software guitar amp-and-effects simulator.
Version 1.1 (which is reviewed in next month’s SOS) is a free update for registered users and features a brand-new amp model — AC Box, based on the celebrated Vox AC30 — to compliment Guitar Rig’s existing Gratifier (Mesa Boogie Rectifier), Twang Reverb (Fender Twin Reverb) and Plexi (Marshall Plexi) amp modules.
There are also three new effects. Treble Booster is a distortion effect, Psychedelay is a reverse delay with detune and Pitch Pedal is a polyphonic pitch-shifter. Sensibly, 50 new presets making use of the new components are included in the update.
Finally, besides various minor changes and bug fixes, Native Instruments have added an Audio Engine Off button, which allows the user to temporarily free up CPU power when running but not actively using Guitar Rig.
The version 1.1 update is available from the Native Instruments web site, where you can now also download a free demo of Guitar Rig to try for yourself. The 30-day demo is available for Windows XP and Mac OS X. 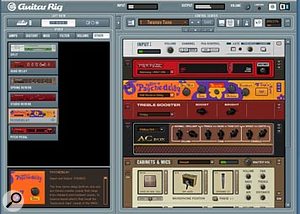