Published 3/7/06
Ten years at the top for Native Instruments
This summer, software designers Native Instruments will celebrate 10 years of trading in the music technology industry. To mark the event, they have announced special offers on a variety of their products alongside a lottery with over £10,000 worth of prizes. The whole event, which has been dubbed NI-Versary, will culminate with a party in Berlin on the 23rd September, to which NI lottery winners will be invited.

The following deals will be offered until September 10th: Traktor DJ Studio will be £80 instead of £189.99, Absynth 3 will be half price at just £99.99, FM7 is only £79.99 down from £219.99 and Guitar Combos is £50, instead of £129. An NI-Versary bundle of Kontakt 2 (£229), which includes Kontakt Experience and a tutorial DVD, plus either East West Adrenaline, Percussive Adventures 2 LE or Stormbreaks, is also available as part of the promotion. 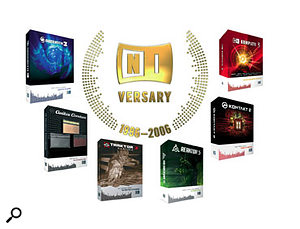 Further offers include crossgrades for current Native Instruments users and discounted prices when upgrading to Komplete 3 from Kontakt, Guitar Rig or Reaktor. The NI lottery will take place on the Native Instruments web site and winners will receive prizes from Gibson, Allen & Heath, JBL, Doepfer and Fujitsu-Siemens. More information can be found at www.ni-versary.com.