Harrison have released a free update for their Mixbus 32C DAW software. Version 8.1 of the software introduces new features such as Mixer Scenes, user-suggested fixes and improvements for the Clip & Cue Launching facilities introduced in version 8, as well as a range of general improvements and bug fixes. 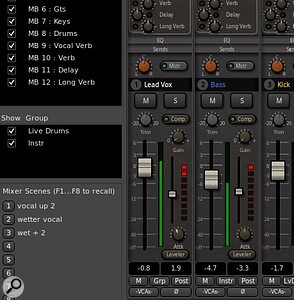 The new Mixer Scenes feature allows users to save and recall their settings to compare different mixes.The newly added Mixer Scenes functionality allows users to quickly save and recall mixer settings, making it possible to audition different mix versions and carry out A/B comparisons between them. All of the mixers parameters can be saved to a scene, including fader position, panning, sends and send levels, EQ, compressor settings and plug-in settings. A total of eight different mixes can be saved, and can be recalled either via a Mixer Scenes window in the interface, or by using the function keys on a QWERTY keyboard.

Clip Launching is a loop-based arrangement feature initially implemented in version 8 to provide Mixbus 32C users with tools similar to those available in software such as Logic Pro X and Ableton Live. The functionality allows song parts to be transformed into Clips, and sequenced on the software’s timeline. The functionality has been subject to numerous improvements and fixes with this latest update, based on feedback and suggestions from users, with Harrison stating that the features are still under ongoing development.

The update is available for free for all Mixbus 32C users who hold a licence for version 8. Harrison are also offering a free demo version for new users looking to try out the software.