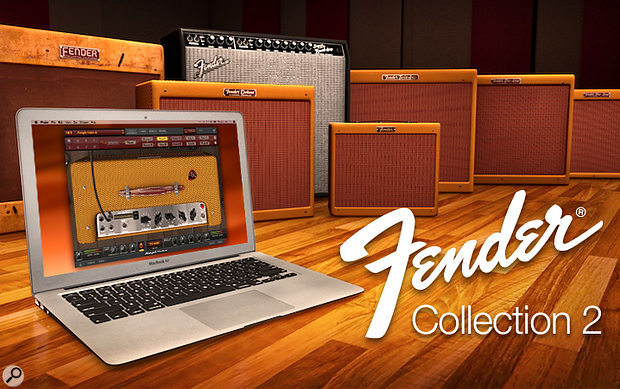 IK Multimedia have today announced the immediate availability of Fender Collection 2 for AmpliTube. Available for Mac and PC, the new collection brings seven recreations of Fender amp simulations — glorious tweed amps and more from the '50s and ‘60s — to the Amplitube platform. These include four amps from the '57 Custom series; the '57 Custom Champ, '57 Custom Deluxe, '57 Custom Twin-Amp, and the '57 Custom Pro, a '57 Bandmaster, plus models of an original '53 Fender Bassman (featuring an ‘aging' switch that switches between 'new old stock’ and a 'burned in’ model)  as well as the iconic '65 Fender Super Reverb.

According to IK Multimedia, Fender Collection 2 for AmpliTube provides "spot-on tone, dynamics and feel" thanks to the debut of the evolution of IK's highly-regarded modelling technologies. Calling it a "a completely new approach to analog modelling” IK have developed so-called Dynamic Interaction Modeling, that recreates not only every individual physical component in the amplifier's design, but also the non-linear behaviour between each component and its effect on other components in the circuit. If it lives up the claims, this approach could provide an unmatched level of realism, touch and feel.

Fender Collection 2 for AmpliTubeis available now through January 15, 2017 for a special introductory priceof just €99.99$99.99 from the IK Multimedia online store, the AmpliTube Custom Shop and participating IK retailers. After January 15, 2017, it will be available for €149.99$149.99.