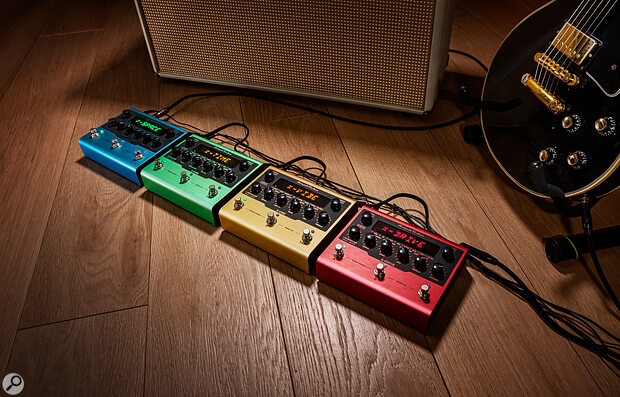 IK Multimedia have just announced a new range of guitar pedals. They're no strangers to the concept, of course — they've been modelling guitar effects for years, most notably in their AmpliTube guitar amp/cab/effects software — but these are the company's first ever standalone hardware stompboxes.

All four newcomers include recreations of iconic analogue pedals, but they are all digital, running at 192kHz and with 4x oversampling. They all have 24-bit A-D/D-A converters too, with an impressive 123dB dynamic range and a frequency response from 5Hz-24kHz. 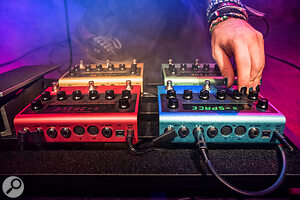 In terms of connectivity, all four X-Gear pedals have both stereo inputs and outputs, plus MIDI I/O and a USB port. The MIDI ports allow for daisy-chaining, and the units will respond to MIDI Program Change messages, so you can use one X-Gear pedal as a master to switch between presets on others. The USB port, meanwhile, allows you to control the pedals via software.

Included with each X-Gear pedal is a software version of it, for running in AmpliTube — with presets between software and hardware versions fully interchangeable. IK Multimedia envisage users perfecting their tone in the studio, and then taking their settings with them on stage.

The IK X-Gear range are due to go on sale in August, and will carry a price of €299 each. Naturally, we'll be reviewing them in due course!