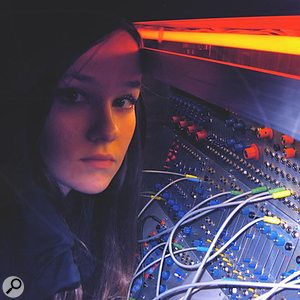 With the final programme for Loop — Ableton’s music summit — being announced, we took the opportunity to catch up with one of the artists on the roster. We talk to Berlin-based Italian minimalist electronic artist, Caterina Barbieri whose 2017 record Patterns of Consciousness has received critical acclaim and even been named in several ‘Best of 2017’ music round-ups.

Having started her musical career with the study of classical guitar at the Conservatory in Bologna, Barbieri was first introduced to electronic music through noise and metal concerts in her teens. Following high school, she began a programme in Electronic Music, but it was her encounter with the Buchla 200 system during her studies at the Royal College of Music, Stockholm, in 2013 that really set her down the path of electronic composition. "The Buchla taught me a way of listening to sound that years of training in classical music never taught me. Suddenly I started hearing all this subatomic dance of particles wrapped in a waveform. And that’s how all started.” says Barbieri.

Patterns of Consciousness is an original work that doesn’t recycle the sonics of its forebears to connect with its audience. This is immediately apparent when you listen to the first track, and according to Barbieri, this was a very deliberate move. "In general I try to avoid iconic timbres from legendary synthesisers that are immediately recognisable and deeply embedded in our music culture. I use simple waveforms because I want to minimize the extra-musical, extrinsic cultural references of my sound and keep the identification of the sound source blurred. When the listener fails to grasp the source behind a sound, she/he engages with a more active listening attitude, reliant on the intrinsic properties of sound as a physical object rather than the extrinsic properties of sound as a cultural object. In this way I find the perception of the sound object itself is enhanced and refreshed.”

It’s this approach, perhaps, that heightens the emotional impact of the 70-minute opus as, by Barbieri’s own admission, it’s not by design. "Actually I have no clear idea of the emotional intention with a composition before I begin to compose. I’ve noticed I have a natural attraction for certain combinations of notes, like a melodic and harmonic “taste” that always comes back when I start writing something. But I think that the emotional aspect of my music is actually the less intentional one."

The synthesizer has clearly shaped Caterina’s compositional approach, as she explains: "I think that in first place the practice on synthesisers helped me developing an attentive and active listening attitude towards the “microscopic” properties of sound. And that’s because synthesisers offer the possibility to shape timbre on a microscopic level and actively experience acoustic and psychoacoustic phenomena in first person. You can study FM modulation in a book but experiencing it and being able to control it with your hands it’s way different. It’s like learning a new language. You cannot just read sentences on a book and expect to learn them. The brain will hold new sentences only once you have actively used them a reasonable number of times. And the same goes for audio concepts. I feel that not only the mind but also the body has to process them to grasp them in high resolution.

"After a certain exposure to a stream of sound you can actively interact with, you gain a better understanding not only of the sound in itself but also of its effects on you and therefore of your own mechanisms of perception. And that’s pretty amazing! Probably the most valuable experience that the practice on synthesisers brought into my compositional process.

"The stream of sound is another interesting aspect of analog synthesisers. Synths are fields of continuous electricity. Sound flows constantly. You don’t press a button to play or stop a musical process. The idea of composing from silence by means of an additive design as well as the “start/stop” logic related to the digital practice are undermined. You tune yourself to an ongoing sound field and make it selective. Eventually, the music is already there even before you start. In this perspective, composition becomes an act of subtraction rather than a demiurgic act of creation from scratch. This shifts the attention from the object and subject of perception to the field where the perception is occurring, “a non-specific viewpoint”.

"And this is very much what I was looking for when I bought my Verbos Harmonic Oscillator, which is the only sound source of my last work Patterns of Consciousness (Important Records, 2017). I wanted to start from the full spectrum of a sound and then being able to filter it into its partials and derive melodic information from its harmonic sound continuum.

"Another module that really shaped my musical brain is the Indexed Quad Sequencer ER-101 from Orthogonal Devices. I bought it because I wanted to work with massive pattern generation and this module allows to write super long patterns and work with different Math Operations (Arithmetic, Geometric, Random, Jitter) to expand and develop patterns. It’s the brain of my setup and it’s the perfect device to bring structure and repeatability inside the chaotic environments that modular synthesis is (in)famous for. I wanted to explore the power of sound repetition and its psycho-physical effects, and the powerful sequencing capabilities of the ER-101 turned out to be a big source of inspiration in this sense.

"Through this module I developed the generative grammar of my music, writing hundreds of patterns that are real-time generated and varied during the live performance. In this compositional process patterns are like the cells of an organism or the units of a language: a limited set of signs that can be recombined to always generate new possibilities. I wanted every piece to be a generative entity. A dynamic and living being able to develop its own organic laws, whose inner potential of growth and change is embedded in the initial instructions of the sequencer.

"Another fundamental concept of voltage-controlled synthesis that definitely affected the compositional process is the “gate”. The gate is actually at the core of the organic evolution of the patterns. While the pattern stored in the sequencer is constantly “read”, an intricate score for gates shifts the portion of the pattern that is actually “played”, accessing only those fractions that I find relevant to the melodic and rhythmical articulation of the musical form. This is not a secondary detail but a fundamental aspect of the functioning of this technology that turned out to be decisive and essential to the inspiration of this work, where the gate is the key of a subtractive compositional design."

Barbieri likes to describe her recent pattern-based music as “Ecstatic Computation”. It’s therefore no surprise that her performance setup involves both hardware and software, as she explains, "My current live rig is my modular setup going into Ableton for further processing, especially multi layered delay lines. I am an long-time fan of Ableton’s ping pong delay and reverb! Recently I’ve also added to my setup some Make Noise modules, which incredibly expanded the possibilities of sonic investigation. I am still exploring them because their capabilities are really impressive and can take you in so many different directions!

"But I am also working more and more with digital synthesizers. I work a lot with SuperCollider to find interesting ways of generating new music material in alternative tunings for example. Another digital instrument that struck me a lot for its unique sound signature and stole much of my attention from hardware this year is Razor from Native Instruments."

Caterina is as deliberate with her choice of equipment and sonics as she is her performance selections. What was it  that interested her in Loop?

Barbieri: "A music summit that aims to give an insight on the creative and technological thinking behind music-making is just brilliant. It’s something I’ve always dreamt about, really. I find that music composition is always a feedback process between humans and technology, a negotiation between the design of the technology and the design of the human brain rather than the simple imposition of an idea upon passive matter. In this sense, I think it’s important to find the time and space to discuss, problematise and  redefine the traditional notions of technology and creativity. And Loop seems to be the perfect place to do it!"

Although not yet sure what she will be performing at Loop — “I think I’ll play a live version from my series Patterns of Consciousness” she says — any performance by Barbieri will be worth catching.