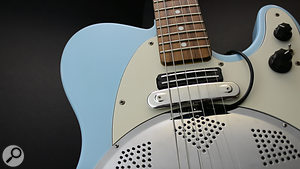 The Submarine Pro is a new type of guitar pickup that can isolate sound from individual strings. It lets you drop bass strings an octave, add gain and sustain to your solos and pan them to different places in your mix all at the same time.

The Submarine Pro was conceived, designed and developed by Pete Roe, critically acclaimed solo singer-songwriter and session musician for artists such as Laura Marling, Willy Mason and Emily Barker.

Since releasing The Submarine two years ago, Roe has been developing a new pickup: Submarine Pro. Slimmer than the original and this time boasting one pickup for each string of the guitar. An internal switching system allows any combination of strings to be routed to a stereo jack output. Submarine Pro slips under the strings of your electric or acoustic guitar. No cutting or drilling is necessary.

Some years ago Roe found himself on a long tour opening for a  band that had only one space on board for him on their bus; he could not bring along his bassist. Being stuck without the sound to convey his songs the way they were intended, Roe experimented with various effects pedals and finally made his own one-string pickups in dingy dressing rooms and budget hotels. Used with an octave pedal, he found his homemade pickup could give the effect of a bass guitar accompaniment. After a long period of research and development, The Submarine was launched in 2015. Now, two years later, the ultimate aim of a six-string version is close to being achieved.

A campaign on Crowdfunder.co.uk is now live and until 5th December 2017, Submarine Pros are available with large discounts. It’s a good chance for musicians looking to get their hands on new gear at a bargain price, and support a ‘one man band’ entrepreneur who has created a pickup that allows you to be a one-man band too.

Artists as diverse as Laura Marling, Royal Blood and Bon Iver took delivery of the original Submarine. After feedback from customers and endorsed artists, it became apparent that a design that offered even greater flexibility and suited the needs of the professional was required. The Submarine Pro can be fitted permanently to both acoustic and electric guitars.

100 extra Submarine Pros with a whopping 50% discount have just been released on the UK-based crowdfunding site crowdfunder.co.uk. The Submarine will continue to raise essential funds until midday 5 December 2017.