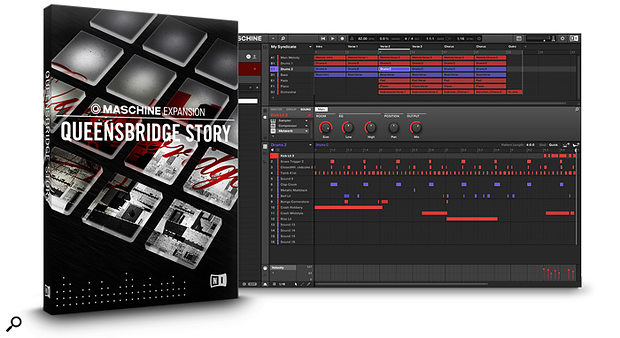 Native Instruments have today introduced Queensbridge Story — a new Maschine Expansion created by one of New York hip hop’s biggest producers, Havoc. The samples in this expansion were curated by Havoc himself and span his nearly 30-year career.

Queensbridge Story is aimed at producers looking to tap into the classic sound of one of hip hop’s living legends. Queensbridge Story runs in the latest Maschine software on Maschine Studio, Maschine, or Maschine Mikro and is available exclusively at the NI Online Shop. A compact version for iMaschine is also available via the iMASCHINE in-app store.

Queensbridge Story traces the career of legendary producer Havoc — the man behind the sound of Nas, 50 Cent, Notorious B.I.G., and many more. Each sample was carefully selected for the expansion by Havoc from his personal sample library. The kits and instruments he compiled deliver a gritty blend of hip hop’s second golden age and a new-classic style heard on the records of some of hip hop’s most prominent artists.

Havoc first rose to fame as a member of Queens, NY duo Mobb Deep. During this period, his signature production style was featured on recordings from Nas, The Notorious B.I.G., P. Diddy, Method Man, and many more. In his second decade in the business, Havoc also took up MC duties on his own solo releases and contributed production to 50 Cent. Now, approaching the 30-year mark in a career of highlights, Havoc’s sound can be heard on new tracks from Kanye West’s The Life of Pablo.

A compact version of Queensbridge Story is also available as an iMaschine Expansion, for creating beats on the go. Tracks can be exported to Maschine Studio, Maschine, and Maschine Mikro for completion.