Published 2/10/22
Made in collaboration with Modular Gang 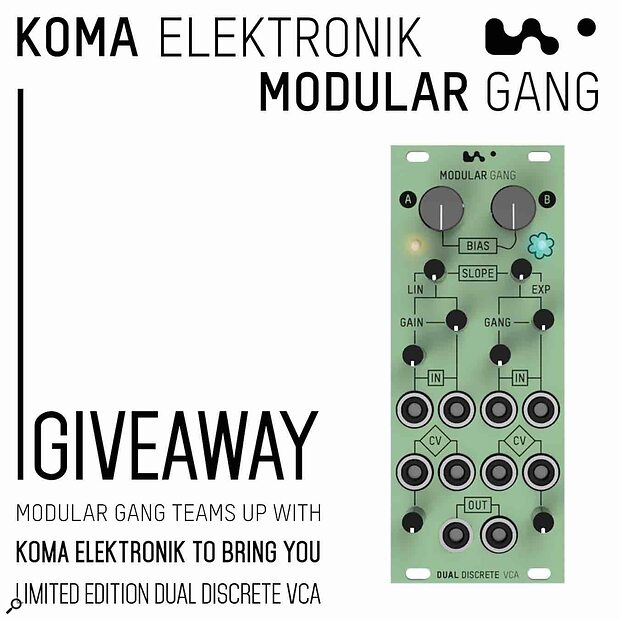 The 10HP module offers two independent high-quality VCA channels which utilise discreet transistor cells, exhibiting low CV and audio bleed along with minimal noise and distortion. It features two audio inputs per channel and can be used as a four input mixer. For those who do wish to introduce some distortion, all four of the module’s inputs are equipped with a soft-clipping stage.

The slope with which the VCA reacts to incoming CV signals can be changed from linear to logarithmic, offering users a choice of CV reaction behaviours. Koma say that this feature also makes for an interesting way to explore sounds when using the VCA for amplitude modulation of audio signals.

Modular Gang Founder Rachel Lyn was inspired by the aesthetics of vintage appliances and early electronic test equipment such as those in the old control room in Berlin’s Kraftwerk building. Drawing on this inspiration, the module comes in what Koma are describing as a ‘murky pea mint’ finish. A flower LED on the front panel adds the final touch, the colour of which will be individual for each module.

In addition to being available for a limited time on Koma’s website, Modular Gang are giving away one module, with details of the giveaway available on their Instagram page.

The Limited Edition Dual Discreet VCA will be shipping from 24 October 2022, priced at €179.