Published 6/1/09
Audio interfaces cause a stir
New from Lexicon is the Ionix series of audio interfaces, which comprises four products that should appeal to DAW users of almost all levels and budgets.

First off is the FW810S (£849), an eight-input, ten-output rackmountable Firewire device with a bit of a difference. On board, each input channel has a full Dbx hardware channel strip, comprising a mic preamp, EQ, a gate, a compressor and a limiter. There’s also a bundle of Lexicon reverbs, which lets you get decent sounds out of the box without relying on pricey plug-ins or additional outboard gear.

The FW810S’s front panel hosts gain controls for all eight input channels, plus separate knobs for controlling the headphones and main outputs. There’s also a bank of LEDs that give visual feedback on the status of the dynamics processors and the input levels, while a pair of combi jack/XLR sockets give easy access to two of the inputs. The remainder of the input ports are on the rear panel, also on combi jack/XLRs, with balanced outputs on quarter-inch jack. MIDI and stereo S/PDIF inputs and outputs also feature. 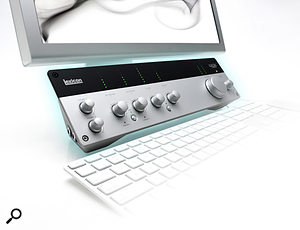 Also in the Ionix range are three desktop (non-rackmountable) audio interfaces, which use USB 2.0 to connect to the host computer. All three are cleverly designed with a slanting front panel, on which reside level meters and controls for adjusting the level of the inputs and outputs.

All three U-prefixed models have a MIDI input and output and stereo line-level and headphones outputs, with the U42S and U82S benefitting from S/PDIF connectivity, dedicated instrument inputs and an additional headphones output.

The FW810S and U42S will ship this month, with the U82S following in February and the U22 in March.