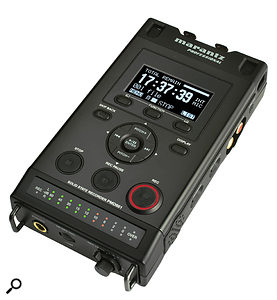 Marantz have announced a successor to their long-serving and, let’s say, ‘robust-looking’ PMD660 solid-state mobile recorder. The new device, the PMD661, falls in line with recent releases from the company, with sleek styling and simply laid-out controls.

The main difference between the two devices is in size — the 661 is 30 percent smaller than the 660, and the boxy casing of the 660 has been replaced by a classy but professional outer shell. Pride of place on the PMD661’s front face is a white-on-black OLED screen, surrounded by menu- and file-navigation controls, as well as a prominent Record button. There is also a nine-step LED meter, with additional ‘over’ indicator, for each channel, alongside an LED that signifies when the device is recording.

A dual-concentric knob gives the user control over the level of both audio inputs, which can be fed by the signals from the built-in condenser mics, or from external equipment, via a pair of XLR sockets, a stereo line-level mini-jack port, and a digital coaxial connection. There are unbalanced line outputs on RCA phono ports, and a quarter-inch jack socket, which has a dedicated level control and allows headphones to be connected.

The PMD661 can record at rates of up to 24-bit/96kHz and can accommodate up to 32GB of solid-state storage in the SDHC format (instead of using Compact Flash, as its predecessor did). A USB 2 connection enables recorded files to be copied to a DAW system, and a wired remote control can be connected to the device, so it can be set to record if the operator is not situated in the optimum recording position.

The Marantz PMD661 costs £523 including VAT. For more information, check out the web site of D&M Professional.