Published 10/3/09
The ultimate Songwriting tool?
Masterwriter, which we reviewed back in SOS October 2006 (and on-line at www.soundonsound.com/sos/oct06/articles/masterwriter.htm), is perhaps the most extensive software suite of tools for songwriters. It’ll help you find words and phrases that rhyme, there's a dictionary and thesaurus, and it has a specially designed word processor-style environment in which to do it all.
The latest news from Masterwriter is that version two is now available. New features include modules such as ‘Word Families’ and ‘Parts Of Speech’, two reference dictionaries that the developers say “will open up a new world of possibilities for descriptive words and ideas”. 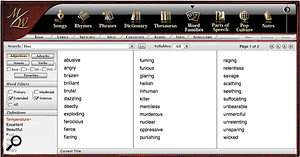 Also new is a complete searchable version of both Old and New testaments of the Bible, and pop culture reference dictionary!
Other improvements come in the form of an expanded ‘sound-alikes’ database, and a redesigned Interface that can be resized. Furthermore, the application loads faster, tackling a criticism we made in our review of Masterwriter version one. The new software costs $299 (£215 at the time of writing); upgrading from version one to version two costs $119 or £85.
www.masterwriter.com
Previous storyNext story