Korg have triggered the annual NAMM announcement avalanche with three new hardware synthesizers, each harking back to a bygone era.

First up is the ARP 2600 M, a compact version of the 2600 FS that Korg released around this time last year. The new M (Module) version is roughly 60 percent of the size of the original, and makes a further concession to studio space by omitting the keyboard, but otherwise offers all of the FS's features plus a few more besides.

Like the 2600 FS, the 2600 M is so faithful to ARP's original that the 1970s manual and patchbook are still applicable. But for this new diminutive iteration, Korg have added a USB MIDI interface, which not only lets you control it from a computer, but which can also connect directly to any class-compliant USB MIDI controller. 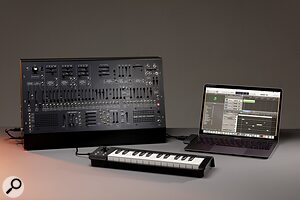 Also new is a choice of filter types. Much like on Korg's MS-20 M desktop module, the 2600 M features a switch for selecting between two different generations of 2600 filter (types 4012 and 4072). Unlike the MS-20 M, though, MIDI extends beyond simple note triggering, so you can apply pitch-bend and modulation, or engage/disengage portamento, via CC.

Korg have also changed the trigger threshold for the ADSR envelope's S&H Gate input to 5V, which should make it much easier to integrate with other instruments and synth modules. The envelope attack and release times have apparently been 'improved' (quite what constitutes an improvement, we're not sure), and the sliders have also been upgraded and are now said to be smoother in action.

The remaining changes are pretty minor: stereo outputs are now on jacks rather than XLRs (which is likely more convenient for the average synth-based setup), and the integral speaker now mutes when a headphone jack is connected.

Next up is another '70s throwback: a re-release of the miniKorg 700S, itself a revised version of the original 700, their first-ever mass-market monosynth. The new instrument is called the miniKorg 700FS (for 'full size', raising the prospect of a shrunken-down version in the future), and was developed with the help of the original's designer, Fumio Mieda. Like the 700S, the FS version sports dual oscillators (each with saw, square and triangle wave shapes), and a pair of filters (high- and low-pass), controlled by the 'Traveler' sliders on the front panel. Indeed, most of the controls can be found along that front edge — a design that reflects the fact that the 700S was intended as a 'secondary' keyboard for organists, who in the '70s could frequently be seen with Korg's monosynth perched atop their Hammonds.

The original 700S boasted a healthy selection of effects, including vibrato, two flavours of chorus and a choice of three ring modulators, to which Korg have added a spring reverb tank for the FS edition. Other enhancements include a built-in arpeggiator, USB and 5-pin DIN MIDI ports, CV/gate input, and an aftertouch keyboard.

Finally, the newly announced Modwave pays homage to Korg's own DW-8000, first introduced in 1985. The mid-'80s saw a big shift from analogue to digital synths, and the DW-8000 straddled those two worlds by combining the then-new wavetable technology with an analogue filter section. The Modwave, however, is an all-digital instrument, and as such boasts a plethora of contemporary features, such as a motion sequencer (borrowed from their recent WaveState synth), an X-Y pad (derived from their Kaoss series of live/DJ controllers), and a hi-res OLED screen like those on their other recent original releases. 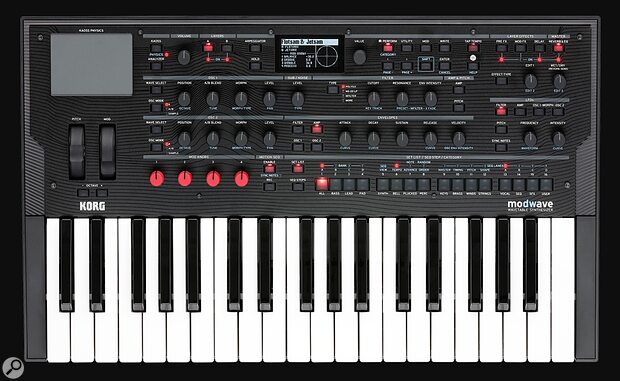 A glance at the Modwave's front panel hints at a very hands-on player experience, while the diagram below lays bare its architecture: dual wavetable oscillators plus a noise source feed into the mixer and then the amp, both of which can be modulated using an extensive mod matrix. Modulation sources are many, and include four motion sequencer step automation lanes, four envelopes and five LFOs, plus the usual pitch-bend, mod wheel and key tracking options, and of course the X-Y pad. A comprehensive effects section follows, and this includes some lesser-spotted examples such as modelled guitar amps and wah pedals, multi-head tape echoes and a reverse delay.

The oscillators bear closer scrutiny. Each can be blended between an A and B wavetable option, and Korg have seen fit to supplement the wavetables with a multi-gigabyte library of PCM samples.

This introductory video should give you a good sense of what the Modwave is capable of. For more detailed specs about all of Korg's new releases, check out their website, below.