Black Lion Audio started life as a modding company, providing after-market upgrades to studio gear, in particular audio interfaces and converters like the Digidesign 192 IO. They've since branched out into building products of their own design, including microphone preamps, compressors and master clocks, but they've never released their own audio interface — until now.

So far, so ordinary, but Black Lion tell us that its sound is something rather special, thanks to some serious over-engineering. For example, all of the Revolution 2x2's power rails are filtered to prevent noise from the digital circuitry or power supply entering the audio path, and all the components come from respected brands like Nichicon, Vishay and Wima. 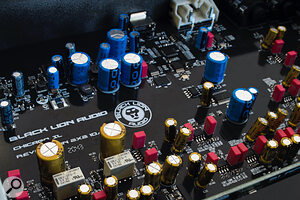 To further sweeten the deal, each Revolution 2x2 interface will ship with a suite of software, including a copy of PreSonus Studio One Artist and plug-ins by Brainworx, iZotope and Plugin Alliance.

The Black Lion Audio Revolution 2x2 is due to become available in February, and will carry a price, in Europe, of €399 excluding VAT.