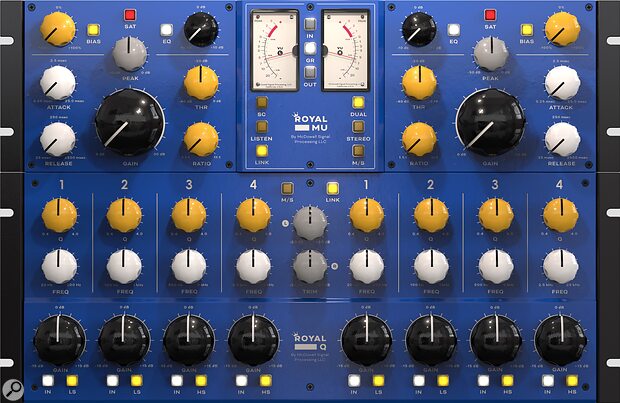 McDSP have just announced two new processors for their pioneering computer-controlled analogue processor, the APB. The Royal Mu is a twin-channel variable-mu-style compressor and limiter, which in addition to the usual attack, release, ratio and threshold controls features analogue biasing and saturation circuits. The Royal Mu can be used in dual-mono, stereo-linked or Mid-Sides modes, and features a side-chain input and a wet/dry blend control.

The Royal Q, meanwhile, is a dual-channel, four-band equaliser, with fully parametric controls throughout. Its frequency bands all overlap, allowing you to perform the 'Pultec trick' of boosting and cutting at the same frequency for deep-sounding kicks or airy highs. Like the Royal Mu, you can use it as a dual-mono, stereo-linked or Mid-Sides processor.

For those unfamiliar with the APB system, the GUI you see above is only that: a control front-end for the innocent-looking green APB rack, which houses a huge amount of reconfigurable analogue circuitry. Thus, these aren't plug-ins at all, or even digital processors — they are analogue throughout. One of the major advantages to this approach (beyond the powerful combination of genuine analogue sound and DAW-recallable settings) is that McDSP can calibrate their processors precisely to the APB's A-D converters. So, even if you recklessly try and clip one of these APB modules, your signal will never exceed 0dBFS — it'll be soft-limited by the APB's proprietary analogue saturation circuitry.

Oh, and one more thing: once they're released to the public (expected around March), the Royal Mu and Royal Q will be free to all registered APB-8 and APB-16 owners.