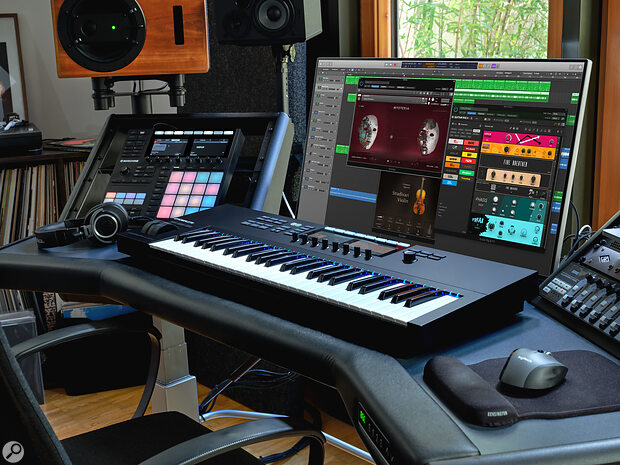 Native Instruments have just announced a major update to their flagship software product Komplete, along with a new version of Guitar Rig.

As ever, the new Komplete is a bumper-pack of NI's biggest releases, with version 13 adding some of NI's biggest hits of the last two years. Joining the fray are Cremona Quartet (which includes the much-vaunted Stradivari Violin), Arkhis, Pharlight, Session Guitarist: Electric Sunburst Deluxe, Butch Vig Drums, Lo-Fi Glow, Modular Icons and more. And, again in true Komplete fashion, the asking price (ranging from £169 for the cut-down Select edition to £999 for Ultimate) represents a whopping 90 percent reduction in price compared with buying all the instruments individually. Now if only you could bill NI for the hours it takes to audition them all...

Also included in Komplete 13, of course, is the latest version of Guitar Rig Pro. This boasts a revised GUI, a slew of new amps, effects and processors, and a new machine-learning technology that apparently improves hardware emulations. NI say that they have already put this technology to use on a number of “iconic and boutique vintage amps”, but they also promise they'll listen to user requests for gear to model too.

Finally, Guitar Rig 6 Pro will be able to host NI's own mixing-oriented plug-ins, including their various Vintage Compressor models, Transient Master processor, Raum reverb, and more. And as ever, it'll come with a litany of presets from high-profile artists and producers, including Zola Jesus, Butch Vig, Pete Thorn, Yvette Young and more.