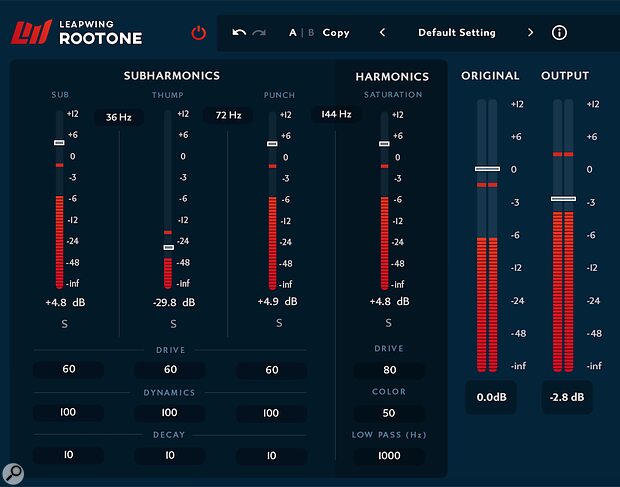 Belgian software devs Leapwing Audio have a reputation for doing things differently, and their newest release — a bass enhancement plug-in called RootOne — very much lives up to it.

RootOne was born out of Leapwing's dissatisfaction with traditional sub-harmonic generators and their tendency to “cause phase-shifting in the low end, resulting in a sense of detachment from the original sound”. Consequently, Leapwing apparently went to great lengths to make sure that the harmonics that RootOne generates remain in phase with the source audio.

The new plug-in offers four bands of processing, with user-adjustable crossover frequencies between them. The lower three bands (labelled Sub, Thump and Punch) all have the same three controls, with Drive determining the amount of harmonics to generate, Dynamics telling the plug-in how faithfully to follow the original signal's amplitude envelope, and Decay offering an adjustable amount of bass overhang.

The fourth band, labelled Harmonics, is designed to make bass sounds audible even on small speakers, and swaps the Drive control for Color (for adjusting the make-up of the generated harmonics), and the Decay parameter for a low-pass filter.

In common with their previous plug-ins, RootOne has a simple and accessible user interface (a Retina-friendly resizable one, no less), and is available in all the common formats for both Mac OS and Windows. It's available now, priced at £179, and a 30-day trial is also available. Click below to watch Leapwing's introductory video.