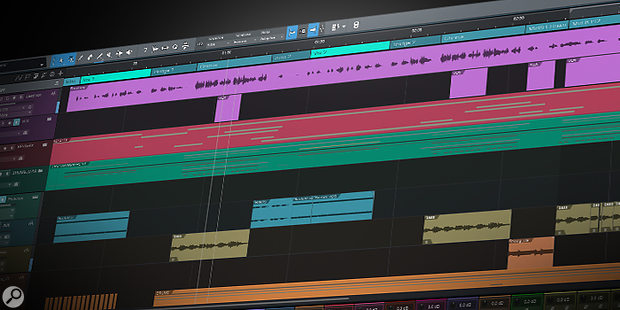 PreSonus have unveiled a major update to their Studio One DAW. Version 5, announced via a live-streamed video, adds a Live-style clip-based arrangement view, a fully-featured score editor (based on that from the premium Notion score creation suite), an updated set of included plug-ins, a performance-oriented Show Page, and much more.

Users of software instruments will appreciate Studio One's new Keyswitch Lane, which keeps MIDI keyswitch data separate from played notes — so no more scrolling down to note C-4 to see whether you're programming a trill or a slide. You can create custom Keyswitch Lane maps for each of your virtual instruments, and save them so that they auto-load when you instantiate a keyswitch-enabled VSTi. These keyswitch maps can be exported and imported too, so before long there may well be freely downloadable maps for popular instruments such as Kontakt.

Other additions include the ability to perform clip-based gain editing, the ability to send or chase MIDI Time Code, send and respond to MIDI Machine Control data, and some enhanced mixer routing facilities that allow you to, for example, set up a separate control room output, making it easy to use room-correction software (like Sonarkworks) without affecting your mix bus.

Studio One's existing Mixer Scene feature has also been expanded, and now lets you save and recall all the settings in the DAW mixer — including mutes, sends, inserts, and even panel show/hide settings.

Those are the headline features, but there's a lot more to Studio One 5. For a full list of what's new, click here, or scroll down to watch PreSonus' introductory video.

Marvel's Guardians Of The Galaxy
2 weeks 9 hours ago.