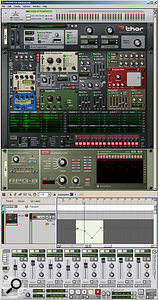 Rumours of a significant update to Propellerhead’s popular Reason software have been circulating since January’s NAMM show, where the Swedish company were demonstrating Thor, a new synth device for Reason (which they said wasn’t going to be available for Reason 3). But don’t all rush to the shops just yet: Reason 4 is still in beta testing stages, which means that it won’t be officially released for a few months. Here’s what you can expect in the new version.

The aforementioned Thor, a polyphonic modular synth instrument, is one of the hottest new tools in the Reason 4 rack. It has six slots that can be filled with a variety of modules, including six different types of oscillator and four filters, as well as envelopes and effects. It is very light on CPU usage, according to Propellerhead.
Also new is the Regroove mixer, which enables the user to apply groove quantisation to sequences, using a mixer-style GUI. Reason 4 will ship with a library of Regroove templates, some of which are extracted from original records. If that’s not enough, you’ll be able to add even more spice to your sequences with RPG8, a monophonic arpeggiator that can apparently be connected to any of Reason’s sound sources.

The main GUI has been overhauled in the new version, and improvements include vector-enabled controller data, allowing for incredibly smooth automation, plus a multitude of new ‘lanes’, which can display alternate takes, automation data, and ‘folded’ information for each track. There are also ‘fully localised’ versions of Reason 4, in German, French and Japanese.

The Reason 4 public beta is available now, but you must apply to become a beta tester through the Propellerhead web site to get a copy. Pricing for the software (once it becomes fully available), will remain the same as the current version, which is £329 in the UK. Upgrades will be available for current Reason users, but those who bought Reason 3 after June 1st 2007 will be eligible for a free upgrade to the new version. The official release is slated for Autumn 2007, although this will depend on the length of the beta-testing stage. For the latest news, check out the Propellerhead web site. 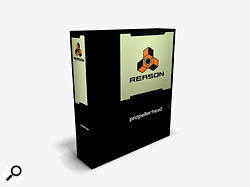