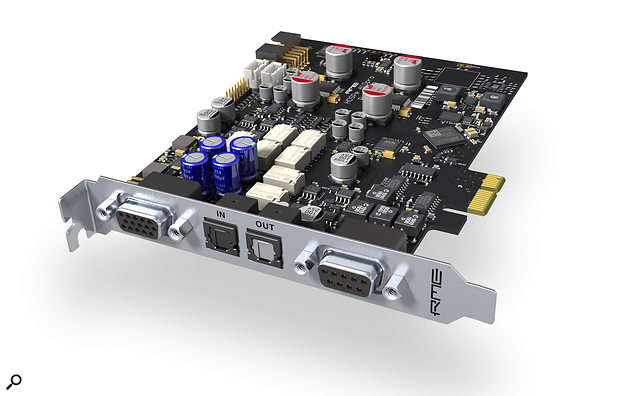 While not the most snappy of product names, RME's HDSPe AIO Pro PCI Express Sound Card is a very impressively specified 192kHz audio card and succeeds the company's HDSPe AIO model, offering 'reference-class' conversion, a powerful new headphone amplifier with relay muting during computer startup and SteadyClock FS. Based on a femtosecond clock that's accurate to one quadrillionth of a second, SteadyClock FS reduces jitter when converting to and from analogue to all digital formats to what RME describe as a new all-time low.

Targeting professional users in the fields of studio and broadcast, the HDSPe AIO Pro PCI offers the same high channel count (30 channels: 14 input, 16 output) and the same analogue/digital input and output capability as the HDSPe AIO, though under the hood RME have reworked and upgraded just about every aspect of the card. Interfacing includes ADAT, SPDIF, AES/EBU and MIDI I/O, and like its predecessor, all inputs and outputs can be used simultaneously.

RME's TotalMix software provides comprehensive monitoring and mixing control over all analogue and digital inputs and outputs. Any combination of audio channels can be combined and routed to the outputs as submixes and network control over the HDSPe AIO Pro is also possible via the free TotalMix Remote App. An additional set of professional audio analysis tools comes in the form of RME's DIGICheck software suite. The RME HDSPe AIO Pro is due to be released in September 2020.