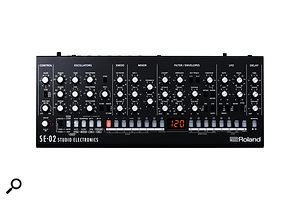 The recent rekindling of Roland’s love affair with all things analogue and modular has taken an exciting new twist with the announcement of the Roland Boutique Designer Series. The first product in the range is the SE-02, a three-oscillator analogue monosynth designed in collaboration with Studio Electronics.

The name might tip a nod to the Studio Electronics SE-1, the Minimoog-inspired rack module that originally put the Californian synth designers on the map, but the SE-02 is its own animal. While it features discrete circuitry and a knob for just about every function in the best analogue tradition, it’s also extensively programmable with 384 preset sounds and 128 further user presets. The three oscillators each offer six different waveforms and are temperature stabilised with automatic tuning. There’s a 24dB low-pass filter, a tempo-syncable LFO with nine waveforms and a dual-stage amplifier. Other features include three types of cross-modulation, a filter feedback loop, envelope sweeping and inverting, oscillator sync, a noise generator and a tempo-syncing delay. The SE-02 is also equipped with a 16-step sequencer providing a host of performance features including parameter automation. Around the back, standard MIDI and USB MIDI connectivity is accompanied by CV inputs for pitch and frequency and a trigger in and out. You will also be able to route external audio through the filter section. 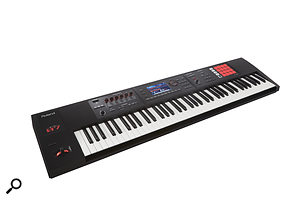 There’s no word yet on when the SE-02 will be available but it's currently slated to cost $499.99. As yet, no follow-up products have been announced either, but the Roland Boutique Designer Series offers the tantalising prospect of future collaborations with other designers. If these can successfully marry the Japanese giant’s skills in mass production and mass appeal with boutique analogue sounds and ingenuity, it will make a lot synth fans very happy.

Roland have also released a version 2.0 software update for their FA Music Workstation keyboard range, introducing a number of enhancements including the ability to preserve note and effects tails when switching sounds. Meanwhile, a new model, the FA-07 ($1499.99), has been announced. This semi-weighted, 76-note keyboard will sit in between the 88-note, fully-weighted FA-08 and the 61-note FA-06, while offering the same sounds, sequencing, sampling and DAW integration capabilities.