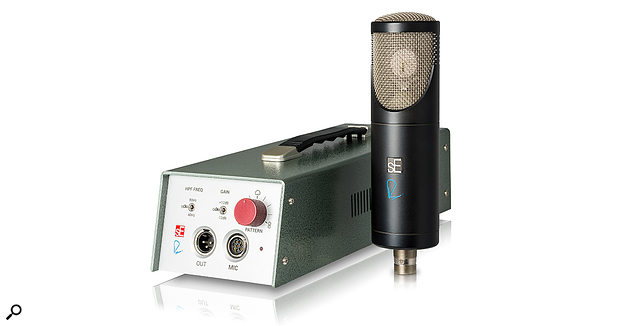 Teaming up once again with Rupert Neve Designs, sE Electronics have added a new microphone to their Rupert Neve Signature Series. The RNT is a large-diaphragm tube condenser mic that promises to combine the larger-than-life quality of vintage tube mics with modern clarity and headroom. It’s thoroughly high-end affair with a high-end price to match. Far from being the runt of the litter, the RNT is unquestionably sE’s new flagship mic.

The RNT is the third collaboration between the Chinese mic manufacturer and legendary designer Rupert Neve, following the well-received RN17 small-diaphragm condenser and RNR1 active ribbon mic. Developed over several years, the mic features a custom condenser capsule and discrete Class-A circuitry throughout.

The first preamp stage, housed in the body of the mic, uses a hand-selected ECC82 vacuum tube, while the second stage, housed in the mic’s external power supply, is built around the same custom op-amps used in the Rupert Neve Designs 5088 mixing console. This floor box also features a nine-position polar pattern switch, moving from omni to cardioid to figure-of-eight via several positions in between, as well as low-cut filter and pad switches.

In addition to a brilliant high-frequency response, wide dynamic range and low self-noise, sE say that the mic offers high SPL handling, making it suitable for close-miking things like drums, brass and guitar cabs as well as traditional applications such as vocals and acoustic instruments. The RNT is shipping now, with an MSRP of 3499 Euros/$3,499.