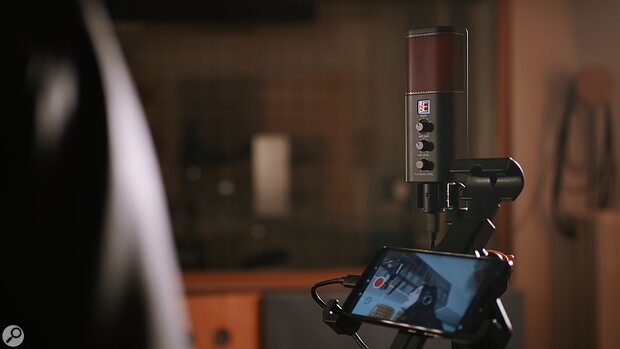 sE Electronics' latest microphone is a USB affair designed for podcasting, streaming and vlogging. The NEOM USB is a cardioid capacitor microphone employing a 16mm capsule that sE say “ensures high-definition clarity and a focused sound”.

The USB port is built into the base of the mic, while the rear panel houses a headphone mini-jack output. On the front of the mic are a trio of knobs governing microphone gain, and both microphone and playback level — which allow you to adjust the playback and monitoring volume independently of each other. The NEOM USB is compatible with both Mac and Windows machines, as well as iOS and Android mobile devices. It's class-compliant on all platforms, though an ASIO driver is available for Windows for lower-latency operation.

sE's new NEOM USB connects via USB-C, and is capable of recording at up to 24-bit/192kHz quality. It ships with a metal desktop stand, a mic clip and thread adaptor, and a USB cable, and is priced at $249. We'll be putting it through its paces in an SOS review very soon!