First up is the STC10, a small-diaphragm condenser that Sontronics say is particularly well suited to spot-miking, and ideal for acoustic instruments and percussion. A cardioid mic, the STC10 is apparently based on the earlier STC1 mic, though the newer STC10 boasts increased sensitivity (16mV/PA, compared with the former’s 12mV/PA) and an extended low-frequency response (down to 20Hz, where the STC1’s response dropped off at around 25Hz). Other features include a switchable -10dB pad, and a 75Hz low-cut filter. The mic comes with a windshield and a basic mic clip, though a shockmount and aluminium flightcase are available to buy separately.

Next is the STC20, another cardioid mic but this time with a large (one-inch) diaphragm — the same gold-sputtered type that can be found in Sontronics’ earlier STC2 model. Sensitivity and frequency response figures are the same as for the STC10 and, again, a shockmount and flightcase are available as optional extras.

Further up the chain is the STC2X, which features the same one-inch capsule but has a polar pattern that can be switched between cardioid and omnidirectional. It also has low-cut filter and pad facilities, but here both are in two stages, allowing attenuation of either 10dB or 20dB, and filter frequencies of either 75Hz or 150Hz. Time + Space say that the STC2X “performs excellently in a wide range of recording situations, particularly male and female vocals”, and also that its omni setting makes it suited to recording podcasts, interviews and round-table conferences. Being a little higher up the market than the STC10 and STC20, the STC2X comes with an elastic shockmount and aluminium flightcase. Pricing for these three microphones is as follows: £89 for the STC10, £129 for the STC20, and £239 for the STC2X. 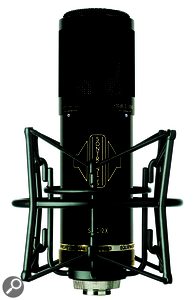 Sontronics also announced a handy in-line pad and polarity inverter: the appropriately named ST Pad/Phase. Like the STC2X, it features two stages of attenuation and so can pad by either -10dB or -20dB. The polarity inversion can be switched in and out, and would appear to be an invaluable tool for people working with mixers or mic preamps that don’t have polarity invert switches. The STC Pad/Phase retails for £39, including VAT.