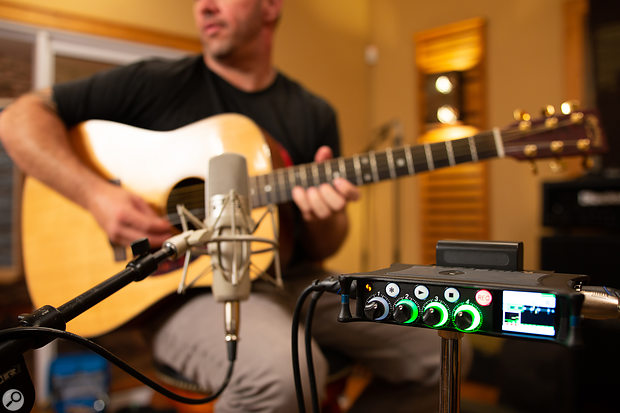 Inspiration strikes. You run to your computer, boot it up, load your DAW, click through various screens and create a new session to record your million-dollar idea. The only problem is that, by the time the DAW is record-ready, the waiting around and context-switching of navigating dialogue boxes has poured figurative water on your creative spark. If this sounds at all familiar, then Sound Devices might have the answer for you. 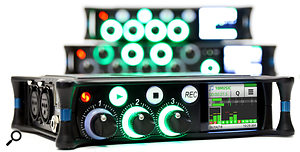 Today, the company known for their location sound recorders expand their MixPre Series to introduce the MixPre-3M and MixPre-6M multitrack audio recorders with built-in USB audio interfacing. As opposed to the T-Series, the ultra-portable M-Series is designed specifically for musicians. To this end, they all — including the previously announced MixPre-10M — record up to 12 tracks of audio (up to 96kHz/24-bit) and integrate features like overdub, track laying, punch in/out, bounce, reverb, vocal air, and metronome.

The MixPre-10M was a first in providing a proper 12-track overdubbing/bounce down multitrack recording machine — essentially taking the old-school mutitracker concept, and bringing it up to date. Keep an eye out for our review of the MixPre-10M in the upcoming July issue (out June 21).

Available now for a reasonable $549 and $799, the MixPre-3M and MixPre-6M feature Sound Devices’ respected Kashmir mic preamps and low-noise A-to-D architecture. The M-Series can also stream multiple channels of audio via USB to a computer, which is ideal for music composers working with a DAW. What’s more, if you’re an existing MixPre-3, 6 or 10T owner, you can get all of the extra functionality for only $99 by purchasing the Musician Plugin that adds all the musician-inspired features.

The M-Series’ musician-friendly, touch-screen interface lets musicians record quickly, and after laying and overdubbing tracks, you can mix using dedicated knobs to control levels, pans, solos, and mutes. You can then render recordings for uploading to social media, sharing with band members or exporting to a DAW for further production.

Connect instruments and/or mics via the XLR/TRS inputs or the Aux in connector. Featuring a digital patchbay, any of the physical inputs, including USB, can be conveniently routed to any track, eliminating the need to plug and re-plug inputs just to record to a different track. Even the internal metronome can be recorded, which is ideal for backing tracks.