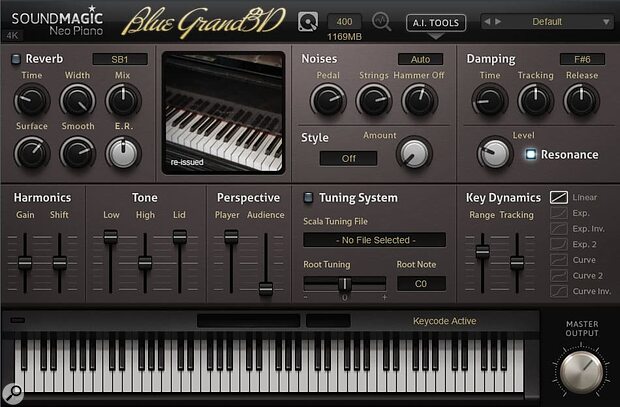 The original Blue Grand3D from Sound Magic was released in 2009, a virtual piano based on samples from Steinway grand pianos. The instrument’s mellow and mature character came from a reverb effect that put the sound into a virtual three-dimensional space. As technology advanced, the original version was replaced in 2013. To answer the demand of customers, Sound Magic have re-released Blue Grand 3D as a limited edition, having reproduced the sound in Neo Piano Engine, their latest 10th-generation hybrid modelling engine.

Blue Grand 3D models piano resonances to give a realistic concert hall sound. The creators captured a range of multi-angled impulse responses from the piano’s soundboard, which are used to create algorithms and model the soundboard resonance. Sympathetic, sustain and string resonances are all also modelled, adding depth and colour to the virtual instrument’s sound.

Another interesting feature is the meticulous control over the damper. Users can control the material of the damper from soft to hard, make detailed adjustments to the decay time and sculpt the sound to perfection. Musicians can choose whether it sounds like a newly built piano, or a piano that’s 10, 20 or 50 years old.

Pedals are also modelled in Blue Grand 3D, an essential part of the performance for any serious pianist. Sound Magic’s Neo Piano Engine accurately represents pedal behaviours including half-pedalling and re-pedalling for the standard three piano pedals and can even support a fourth pedal.

Timbre edits can be made via several controls on Blue Grand 3D’s interface. Users can change the lid position and can choose between low frequency and high frequency. With the modelling feature of the engine, musicians can even adjust the harmonic partial of the sound to get a unique sound. There is also a professional reverb unit and microphone perspective controls.

Compatible with both Mac and Windows operating systems,