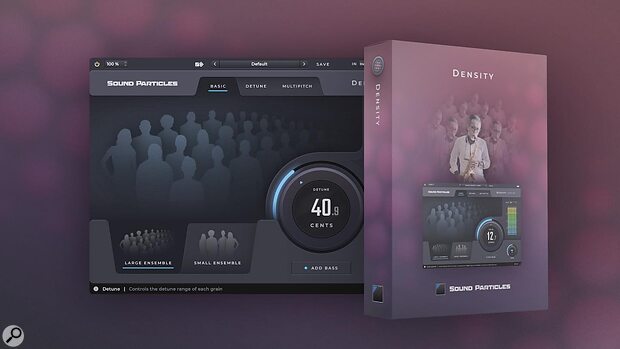 Sound Particles have released Density, a plug-in effect that uses its input source to create layers of sounds using granular synthesis techniques. Capable of turning a single voice into a choir, or a violin into a string ensemble, Density allows users to apply movement, timing and pitch differences to the generated layers, emulating the sound of multiple musicians playing together. 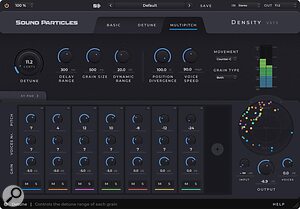 Sound Particles Density GUI - Multipitch modeThree modes of operation are available, Basic, Detune, and Multipitch. Basic mode provides users with a simple interface with a limited set of parameters to quickly produce layered sounds, whilst Detune introduces further parameters to allow more in-depth control over the sound and positioning of the generated layers. Multipitch mode goes a step further again, allowing users to create up to eight groups of voices, each with their own set of individual parameters. In Detune and Multipitch modes, an assignable XY pad can be used to control two parameters at once for expressive performance.

Density supports a large selection of channel formats, from mono, stereo and surround, all the way up to large channel-count immersive formats such as Dolby Atmos. Ambisonic and binaural formats are also supported. The GUI also includes a Top View, giving users a visual representation of each layers’ position within a 3D space.

The plug-in is available in AAX Native, VST3, AU and AUv3 formats, and is Supported on Windows 10 or above, as well as macOS 10.3 or above.

Density is available now for an introductory price of $99£77.21 including VAT, until 26th June 2022, after which it will be priced at $119£92.82 including VAT. More information along with some audio examples can be found over at the Sound Particles website.