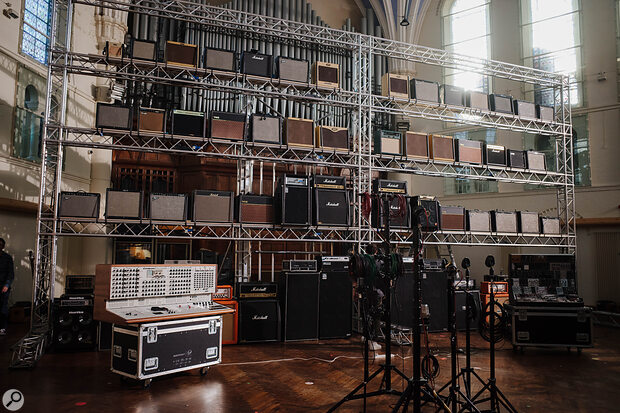 Spitfire Audio are no strangers to AIR Studios, having recorded some of their most prestigious orchestral libraries at the legendary recording house's Lyndhurst Hall. Their latest concoction, though, puts this world-famous acoustic to what must be one of its strangest uses yet, and is about as far from the classical orchestra as it's possible to get.

Aperture: The Stack is a software instrument, created from recordings of an unlikely collection of electronic instruments being played through no fewer than 56 classic guitar amps and, just for the hell of it, four subwoofers.

In use, this potential cacophony is tamed via the large Aperture control in the centre of the UI. As Spitfire put it: “Achieve new seismic levels of expression by controlling dynamics and the number of amps simultaneously. Moving from the smallest Aperture setting, the tight and precise sound from fewer amps builds with ferocity and intensity as you open up the Aperture ring, giving you a range of sounds you are unlikely to hear again.”

It's also a range of sounds that's nigh-on impossible to describe in words — for a better idea of what that collection of instruments played through over fifty guitar amps might sound like, the first few seconds of Spitfire's 'making of' video (see below) are highly instructive.

There's a slight catch though: Spitfire's Aperture: The Stack isn't actually available to buy yet. It will become so, on 1st December (priced at £199), but until then, they're offering it for 'free' to anyone who spends £299 or more on Spitfire goodies during their Black Friday sale. The sale lasts until 30th November, so you've got plenty of time to give your credit card a good workout!