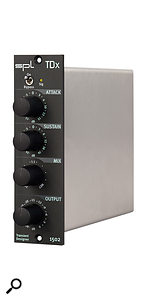 German audio experts SPL have introduced a pair of new modules that package two of their most celebrated processing tools — the Transient Designer and the De-Esser — in 500-series format. Though they have experimented with modular formats in the past via their own proprietary RackPack system, this is the first time SPL have committed to the API Lunchbox format. It’s further evidence that the format is becoming not just viable but practically obligatory for studio hardware manufacturers.

The TDx Transient Designer module features the familiar attack and sustain controls, using SPL’s  trusty Differential Envelope Technology (DET) to completely reshape these key characteristics. What’s new is that the module also provides a wet/dry mix control for parallel processing. An output level control and bypass switch are also provided. The DeS Dual Band De-Esser similarly repackages some tried-and-tested SPL signal processing but, again, there’s a twist. The module provides separate low and high de-essing bands, placed in series and switched in and out individually. The low band features a male/female voice switch that adjusts the values of SPL’s sibilance-reducing circuitry. Both modules should be available ver soon. The TDx costs £429$599 and the DeS costs £409$579. 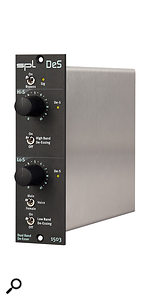