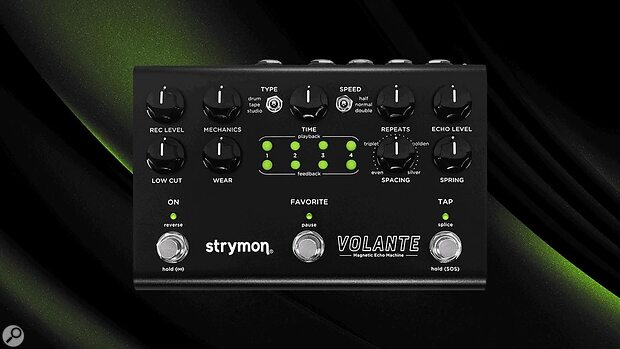 Strymon have announced four new Midnight Edition pedals, all of which are available for a limited time whilst stocks last. The Volante, NightSky, Zelzah (print / web / app / replica / PDF editions), and Compadre are the latest devices to join the range, with each pedal available in a new, all-black finish, complete with black knobs and white lettering.

Volante is described as a multi-head echo machine, and is equipped with three different delay voicings, as well as selectable heads which each feature separate playback and feedback behaviour. A wealth of hands-on control options are available for shaping the delay tails, and the pedal also boasts a modelled spring reverb. Volante offers full MIDI control over its parameters, and also features a built-in looper.

NightSky is a reverb processor equipped with a synth-like resonant filter that can be controlled by multiple modulation waveshapes, offering a wide range of sound design possibilities. All of the pedal’s parameters can be controlled via MIDI, and there is also an on-board step sequencer.

Zelzah promises to provide a range of classic phaser tones, and also offers a variety of chorus, vibrato, and flanger effects thanks to its ’two pedals in one’ design. Four- and six-stage phasing options are available, and there is also an envelope phaser function. Once again, MIDI control is available for all of the pedal’s functions, with each section able to be controlled independently.

Compadre is an analogue compressor which offers both transparent and more obvious vintage-inspired compression sounds. It also includes a gain boost that can be configured to provide a clean or soft-clipped boost, with selectable EQ curves offering some tonal control, and a Mix control is present to allow for parallel compression. In addition to MIDI control, the pedal’s VCA can be controlled externally via an expression pedal input.

As well as the latest additions to the range, the previously released Riverside and Sunset Midnight Edition pedals are still currently available directly from Strymon. All other limited editions are now sold out for direct orders, although the company say that they may still be available through authorised dealers.

Each of the pedals are available now whilst stocks last, with pricing as follows: