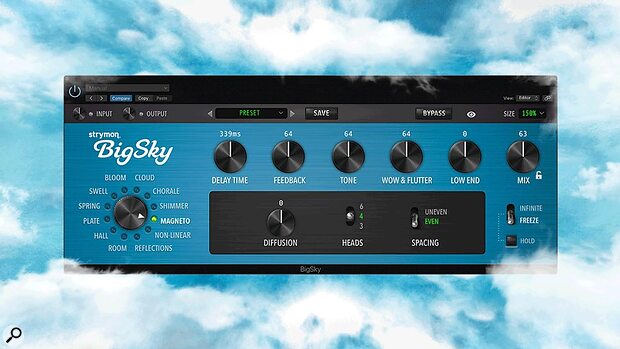 Guitar pedal manufacturer Strymon have announced the release of their first software plug-in, the BigSky reverb. A direct port of their BigSky reverb pedal (reviewed here in January 2014), the plug-in offers the same 12 algorithms as the hardware version but with the added benefits that come with software, such as the ability to run multiple instances and easily automate parameters.

The BigSky’s interface has been streamlined when compared to that of the hardware, with the plug-in’s layout adjusting automatically depending on which algorithm is selected, offering quick and easy access to the most essential controls for each reverb machine.

The Infinite and Freeze functions available on the hardware version are also included, offering two infinite sustain modes. With Infinite selected, a hold button enables reverbs to sustain indefinitely, with each new note played adding to the reverb signal. In Freeze mode, the hold button will once again create an infinite reverb effect, but with new notes playing over the top of the sustained sound rather than adding to it.

Check out the introductory video below.

BigSky is available in AAX, VST3, and AU formats. It is supported on PCs running Windows 10, and Macs running macOS Monterey or Big Sur. The plug-in is authorised via iLok Licence Manager, and so requires an iLok account, but not a physical dongle.

BigSky is available to purchase now from the product page on the Strymon website, priced at $199. Customers outside of the US currently need to purchase through a Strymon dealer, more information is available here. A seven-day free trial is also available.