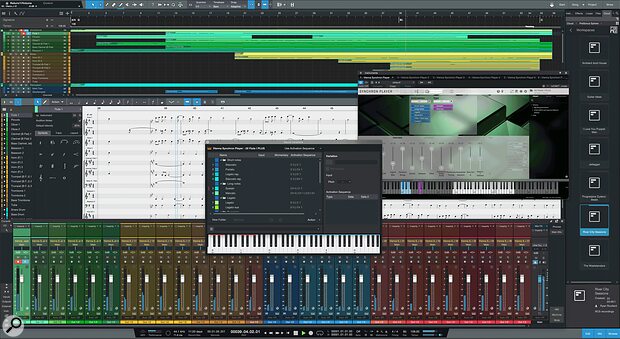 Studio One has been given a 'point' update, which adds over 30 new features to PreSonus' fast-evolving DAW.

New to version 5.2 is Sound Variations, a system that aims to simplify the use of articulations in complex sound libraries. You can assign articulations to different Sound Variations, and then activate them in a number of ways: from a context menu (where you can give your Sound Variations friendly names), via keyswitches, or using hardware MIDI controllers. Sound Variations also get their own dedicated automation lane in the Note Editor, and PreSonus have released an API that allows software instrument makers to create Sound Variation maps ready to use out of the box (VSL's Synchron libraries, and all of UJAM's instruments, have already taken advantage).

The Score View has also been revised, and now includes drum notation and tabulature, plus a number of other operational enhancements. The Arranger track now appears in both the 'normal' project view and in the performance-oriented Show Page, allowing you to modify your song arrangements in real time while performing. You'll also be able to take control of your Studio One live sets from a mobile phone or tablet, thanks to an imminent update to Studio One Remote. The update will allow you to change patches, loop song sections, and more, and also allows multiple mobile devices to connect to Studio One simultaneously.

There are too many enhancements to mention them all here, but for a full run-down, visit the URL at the bottom of this page. Or, for a quick introduction to what's new, check out the Top Ten New Features video below.