Polyend have announced the release of Play, a new sample and MIDI-based groovebox. Described by Polyend as possibly the most flexible and inspirational groovebox ever created, Play comes loaded with over 3000 samples, eight tracks of audio sequencing, eight polyphonic MIDI tracks, and a wide variety of playback tools and effects.

Samples can be placed anywhere on Play’s grid, with familiar sample-based tools providing easy adjustment of the available parameters. Select and Adjust controls allow independent control over step parameters, and if players are struggling for inspiration, a Smart Fill function will automatically fill any selected area with an entire beat, a random placement of steps, or even a Euclidean spread.

A Perform mode allows users to make non-destructive changes to their tracks via performance effects that include Tune, Filter, Overdrive, Rearranger, Reverb and many more. Automation can be live recorded, or individual step values changed on the fly, whilst pattern chaining allows entire sequences to be mapped anywhere on the grid for live performance. Patterns can also be instantly saved and recalled, which Polyend say is perfect for providing a backup plan if things go wrong whilst performing live! A master effects section including a Reverb, Delay, Sound Enhancer, Limiter and Saturator is also included to allow processing of an entire mix.

Play features eight internal audio tracks, and eight polyphonic MIDI tracks each with the ability to output separate MIDI values, enabling deep integration with external instruments. Each track can have an independent length (from 1 to 64 steps) as well as different speeds, playback modes and swing values, allowing the creation of polymetric and polyrhythmic sequences. The device's rotary knobs feature flexible MIDI CC mapping per track, and an external controller can be connected to provide a MIDI note input. In terms of MIDI output, Play can transmit chords, arpeggios, Program and Bank Changes, Pitch Bend, MIDI Clock and more.

Both audio and MIDI connectivity is presented on 3.5mm connectors, with the appropriate adapters to break the connections out to quarter-inch and DIN connectors included. Power is supplied via USB-C, and Polyend say that Play can easily be powered by a portable power bank or computer, as well as the included wall adapter. 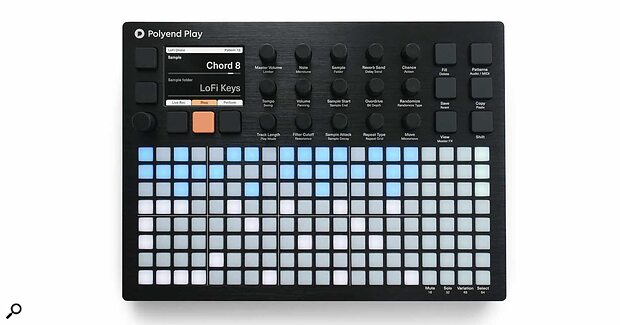 Play will be priced at $799799 Euros, with availability to be announced.